4 Will Smith’s Gigantic $2.5 Million RV The Heat Is Now Used for Unglamorous Glamping

Somewhere in Austin, Texas, a new glamping resort is about to open its doors and welcome the first guests. 7744 Ranch, despite its name, is unlike any other ranch or, for that matter, any other glamping resort, no matter how fancy or expensive.

7744 Ranch is the brainchild of Ron Anderson, the founder of Anderson Mobile Estates, once the go-to company for ultra-luxury production trailers. If the name rings a bell, it’s probably because it was, in the early 2000s, the company that provided mobile homes for the likes of Will Smith, Vin Diesel, Mariah Carey, Jennifer Lopez, and even former U.S. President Bill Clinton, when they were away from their homes on business.

Anderson Mobile Estates trailers were, without exception, ultra-luxurious, furnished with top-quality materials and custom furniture, with interiors inspired by the yachting industry and amenities of the kind you were unlikely to find in any other RV at the time. The biggest units, like Smith and Diesel’s, featured several slide-outs and the patented pop-up roof, which created a second level out of the first at the touch of a single button.

Smith’s custom-made unit, called The Heat, is still considered today the most expensive in the world, while Diesel’s comes second. Real estate vlogger Enes Yilmazer calls it the “world’s largest RV,” which is only partially accurate: at 1,200 square feet (11.5 square meters), this unit is indeed massive, with an interior volume unmatched by other RVs. That said, it’s also on par with The Heat and Baby Girl, the unit designed for Jennifer Lopez we covered on a previous occasion.

These three units, and two more, can now be rented for glamping by non-famous (but still well-off) folk. Diesel’s The Aspen (previously known as The Comfy Cabin) is the “coziest of them all” and offers incredible amenities for at least four guests accustomed to living large. That is not an exaggeration: this RV is fancier than actual brick-and-mortar mansions, with two lounges, a fully-equipped, real-size kitchen, a spa-like bathroom, and another half-bath upstairs. It is, in short, a proper home, but on wheels.

Enes says that this is the OG Anderson Mobile Estates trailer and that, before it was lent out to Diesel on an extended basis, it was initially used by Smith before he got The Heat. Along the years, it also slept Jennifer Lopez and an unnamed pro-golfer who would often host high-stakes tournaments in the rear lounge, which comes with its own putting green.

Access is possible via two doors, either through the kitchen or the rear lounge. The lower level is dedicated exclusively to entertaining, and, as you can see in either video, it offers plenty of space for it. Hardwood floors in darker tones, light wood paneling, and light-colored custom furniture give the place a very cozy cabin vibe and the name for the unit.

The kitchen is bigger than you’d find in a house, with steel finishes, an oversize Viking refrigerator, a full oven and stove, microwave, sink, and a wraparound marble countertop with a sidebar. There’s a dining nook opposite, with a hardwood table and two leather benches, and the front lounge, with dual matching sofas, large-screen TV and sound bar. The rear lounge can serve as an office if need be, in which case, it can be made more private by means of a thick curtain.

Mid-floor is a luxury bathroom with mosaic tiles on the floor, Carrara marble for the countertops and even the walls of the gigantic shower, and chrome fixtures. A laundry area with washer and drier and storage space is right outside.

Upstairs is the sleeping area, divided in two by another luxurious but smaller bathroom. It’s called a half-bath not because of its size, because it’s still huge by RV standards, but because it lacks a shower. Right above the staircase is a sleeping area with two bunk beds, which was initially used by Smith and Diesel’s kids. Mid-way is the bathroom, while the master bedroom is at the rear. Again, the volume is incredible: you have a king-size bed, two armchairs, a wardrobe, and enough space to walk around without ever having to worry about bumping into stuff.

Anderson Mobile Estates tells us that a night at the 7744 Ranch ranges between $400 and $850, depending on which unit you choose. This includes access to on-site amenities, like the sauna, outdoor dining, and coffee spot, but in the case of The Aspen, it does not include a 40x20-foot (12x6-meter) tent you can set up outside the RV for all-weather events. 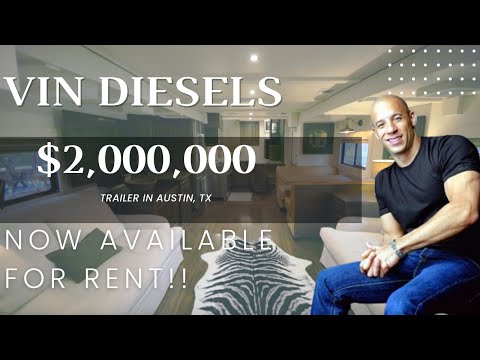 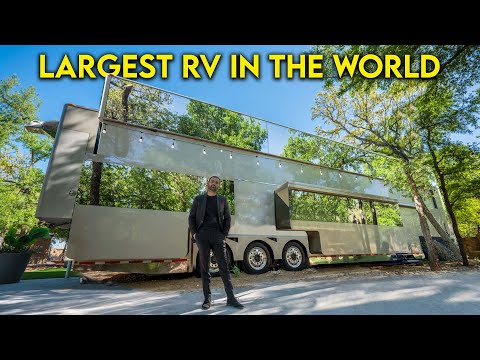