1 Michelle Rodriguez Gets Her Own Fast and Furious Spinoff, Letty

A new Fast 9 teaser is out, and it comes with an introduction by leading man Vin Diesel—or, as his fans call him, the man you’d want to narrate your entire life story.
20 photos

Technically, the teaser doesn’t include a lot of new footage, but it’s edited differently than the 3-minute trailer we got earlier this month, thus creating a slightly different feel for the viewer. Vin Diesel does the intro after driving into the frame (and straight back into fans’ hearts) in a gorgeous Challenger, talking about how the past year has been rough, unexpected, and alienating.

That said, it’s time to go back to communal spaces, including movie theaters. Fast 9, the latest installment in the Fast and Furious franchise, drops on June 25, and it will officially be the first summer blockbuster release. In a way, it will be the first movie to test out the theory that vaccinated audiences are ready to go back into theaters. Even with the wide appeal of the FF movies, this is a daunting task, so expect lots of promos to improve the odds of success.

“After staying apart for so long, it’s time to come back together,” Diesel says. “To laugh, to cheer, we’re ready to make you believe again. Because nobody does a comeback like the movies.”

A bonus is offered with the announcement, but it’s limited to U.S. audiences: Universal is launching “Fast Fridays,” an event that will include free screenings of the previous installments all the way up to the F9 release, Entertainment Weekly reports. To that end, it has partnered with cinema chains across the country and will offer a new (old) Fast and Furious movie each week to interested fans.

“The Fast films are all about family, and Universal wanted to find a way to thank our huge family of Fast fans around the country for their passion and loyalty over the past 20 years,” Jim Orr, president of domestic theatrical distribution at Universal, tells EW. “We’re grateful to our theater partners for their help in making this screening series possible and we are delighted to welcome audiences back to theaters to experience the wild Fast ride all over again. And we cannot wait to blow everyone’s minds with the release of F9 on June 25.” 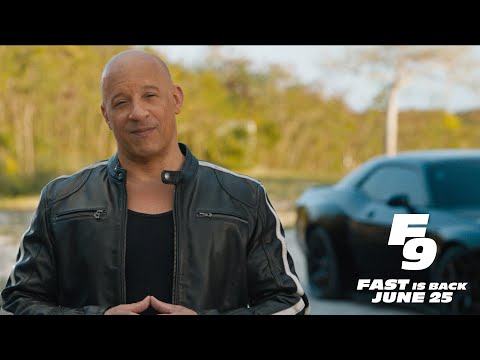