1 7-Second Honda Civics Attack the Houston Raceway in Texas, It's a Bare-Knuckle Fight

5 1,500 HP Diesel Dodge Ram Is a Truck That Can Beat the LaFerrari in the 1/4-Mile
Car video reviews:
Space Junk

It’s not all about the TX2K22 event in our drag racing category these days, because we’ve also covered videos shot at other locations nationwide. The one embedded at the bottom of the page, taken at the South Georgia Motorsports Park, has to be one of the most exciting we’ve seen in a long, long time.
11 photos

Instead of a twin-turbocharged blue-blooded supercar, a twin-engine old-timer, or a vehicle that doesn’t look like its original self anymore, it depicts one bad-to-the-bone pickup. This Dodge Ram was born in the 1990s, and its current owner has held on to it ever since he bought it new.

Back in the day, he remembers challenging muscle cars to quarter-mile runs, doing low-11s on a constant basis, and that's when it still had stuff such as air conditioning. But not anymore, because over the years, it has undergone extensive modifications. Heck, that’s too soft a word used to describe this vehicle, which is so crazy that it definitely belongs between four padded walls.

Packing a 526 engine, according to the owner, with a 521 blower attached to it, apparently, the biggest of its kind that you can fit, this workhorse has in the region of 3,000 horsepower available via the right pedal. Drag radials, the mandatory parachute out back to stop it faster, a very basic cockpit with a racing seat, and roll cage meant to protect the driver in case something goes bad are other defining features.

Ready to hear how fast it is down the quarter-mile? Well, unless you haven’t paid attention to the title, this will definitely shock you, because you are looking at 4 seconds, with a record of 3:98, the owner claims. This Ram is so powerful that it pulls massive wheelies, and the front tires don’t hit the ground for a few hundred feet after takeoff. But enough talking about it, as it is now time to see it in action. 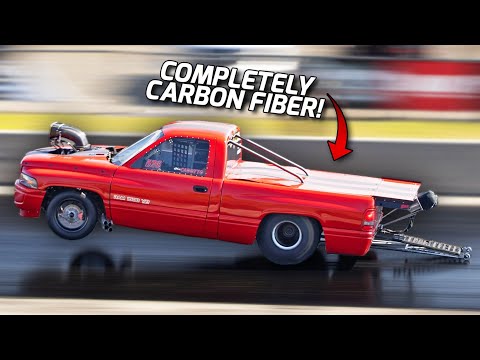