1 Audi Turns Up the Wick on the 2023 RS 5 Stateside, Launches New Competition Package

Are you used to seeing the Jeep Grand Cherokee Trackhawk take on the Lamborghini Urus, and the occasional Hellcat, and other muscly cars at drag strips all over the world? Well, so are we, but in this instance, it met some very unlikely rivals.
7 photos

Sitting next to the supercharged 6.2-liter V8-powered Trackhawk, which enjoys 707 horsepower via the loud pedal, was the Bentley Continental GT Speed Convertible. The open-top luxury cruiser has 660 hp produced by its twin-turbo 6.0-liter W12.

To the right, we can find an Audi RS 5 Coupe. The BMW M4 challenger from the Ingolstadt company has 450 horsepower, and a 2.9-liter V6 under the hood, with twin turbocharging. Finally, the least powerful of the lot is the BMW M2 Competition, with its twin-turbo 3.0-liter straight-six, making 410 horsepower.

Now, even though they look radically different both in real life and on paper, these unlikely rivals have similar performance. Three quarter-mile drag races from a standing start should be enough to decide the winner, which was the same vehicle each time. To kick it up a notch, they were then subjected to two half-mile runs, from a 50 mph (80 kph) rolling start, with the second one being carried out in their sportiest setting.

Last but not least, a brake test from 100 mph (160 kph) revealed the obvious, which is that the biggest one there, namely the Jeep, is also the hardest to stop. So, think you can tell which one is quicker in a straight-line sprint between the four? You’d better take a short break, as the video that you’re about to watch is almost 10 minutes long. 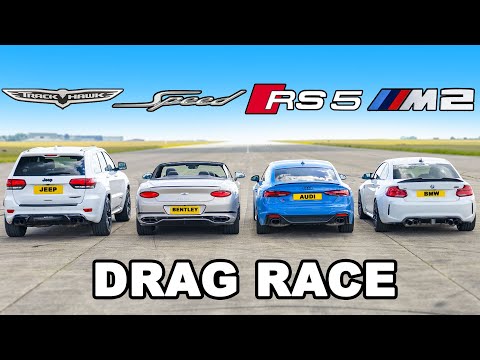