2 How Is This for a Next-Gen Honda Civic Type-R?

Following yesterday’s official teaser, the 2023 Honda Civic Type R has been spied testing in the open. The prototype wears a different camouflage compared to the one highlighted by the Japanese automaker and reveals some of that sweet (for a four-pot) engine sound.
7 photos

As we already mentioned the power unit, we might as well continue with it and tell you that it will continue to use a turbocharged 2.0-liter four-cylinder, hooked up to a six-speed manual transmission and front-wheel drive.

The size and layout will pin it against the likes of other FWD compact hot hatchbacks, such as the Renault Megane RS, Volkswagen Golf GTI, and Hyundai i30 N. The output and torque are still unknown, but it should rock a bit more power than its predecessor, which has 306 hp and 295 lb-ft (400 Nm) of torque available via the right pedal in the United States. This allows it to sprint from 0 to 62 mph (0-100 kph) in less than 6 seconds.

Design wise, the 2023 Civic Type R looks more mature. The upper and lower grilles have become slightly bigger, and the bumpers seem more eye-catching. It has a four-fin diffuser with cutouts in the middle for the three exhaust pipes, albeit not this prototype though, a big wing attached to the tailgate, and sticky tires wrapped around the new wheels. Brembo brakes are on deck, together with a chassis tune that will further differentiate it from the new generation Civic.

Overall, Honda’s new hot hatch looks very promising, and should be one of the best in the segment – after all, it has some big shoes to fill. But we will find out if that is indeed the case next year, as that is when it will be unveiled, according to the auto firm. The first units of the car should make their way to dealers across the U.S. probably next summer, so it might launch as a 2023MY. 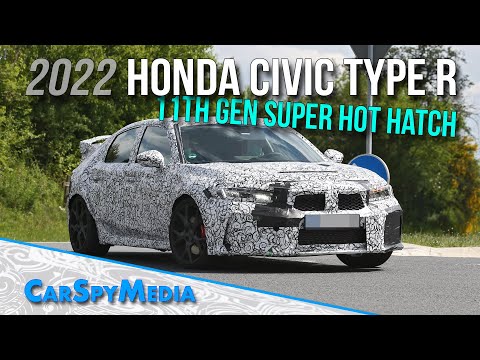