Let’s just say you won’t be avoiding any moose in the 2021 Volkswagen ID.4, as the German electric compact crossover has become the latest vehicle to fail the dreaded challenge.
10 photos

Set loose between the cones by Km77, the 2021 ID.4 revealed its tail-happy nature every time, and even with the ESC kicking it, the driver found it difficult to perform the maneuver.

The best attempt was recorded at 73 kph (45 mph), 4 kph (2.5 mph) less than the minimum required speed, as trying to drive it faster led to a cone shower.

This puts it in the same zone as the 2021 Dacia Sandero Stepway, a jacked-up variant of the regular small hatchback, which also completed the course at 73 kph (45 mph).

The people behind the test said that the oversteering was excessive, and the tires, a set of Bridgestone Turanza Eco that measure 235/45R21 at the front and 255/40R21 at the rear, offer little lateral grip.

Despite being rear-wheel-drive, the ID.4 performed like a front-wheel-drive car in the slalom test, according to Km77. It refused to kick out its tail and struggled to change direction.

On a more positive note, Euro NCAP has awarded the Volkswagen ID.4 with a five-star safety rating. The EV scored 93% in the Adult Occupant, 89% in the Child Occupant and 76% in the Pedestrian categories a few months ago, and 85% in the Safety Assist.

The European safety specialists said that the ID.4, as well as its Czech sibling, the Skoda Enyaq iV, have robust structures and offer impressive performance.

Another vehicle tested on that day was the Dacia Sandero Stepway, which scored a disappointing two stars. 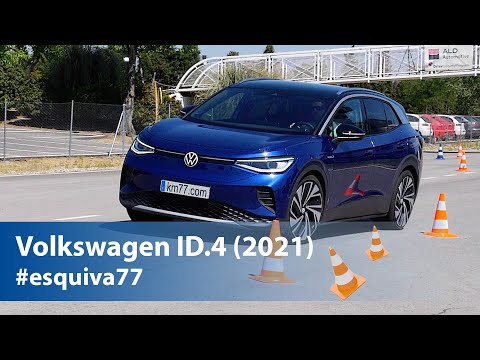