2 Did You Think the New BMW M4 Can Pass the Moose Test? Boy, You Were Wrong!

Video: 2002 Renault Avantime Chic-Looking Minivan Is Too Comfy To Pass the Moose Test

Home > News > Safety
Cristian Gnaticov
Having put the Citroen Xantia through its paces in the moose test earlier this year, followed by the first-generation Mercedes-Benz A-Class shortly after, Km77 did the same to yet another old-timer.
8 photos

The model subjected the challenging maneuver that replicates what happens when a car swerves to avoid an obstacle in the middle of the road and then tries to get back in the initial lane with one turn of the wheel was a Renault Avantime.

Don’t know what the Renault Avantime is? That’s alright, because less than 9,000 units were made from 2001 to 2003. It was related to the era’s Megane and Espace, and was a chic-looking minivan, with a three-door design, which was supposed to cater to the needs of young drivers, having been in the possession of their parents before that, hence the youthful styling.

Increasing the entry speed to 73 kph (45 mph) brings out the oversteering tendency, and at 75 kph (47 mph) it performed even wilder. The driver noted that the steering is not precise at all, and since it tips the scales at over 1,700 kg (3,750 lbs) and is very comfortable on the go, it struggled in the slalom test too. The French minivan does feature ESC, though Km77 did not say anything about how it changes the behavior of the car.

Now, before moving on to the video, we have to highlight the fact that the Avantime was outperformed by the original A-Class, which completed the course at 75 kph (47 mph), and the Xantia, which did it at 73 kph (45 mph). It also came short of the modern-day Jeep Renegade 4xe, which stayed within the cones at 70 kph (43.5 mph). 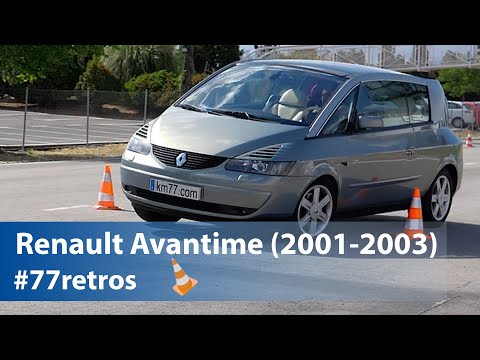