2 Xventure, When the Functionality of an Explorer Meets the Luxury of a Superyacht

Volkswagen Jetta Brand Is a Hit Among Chinese Car Virgins

If you’re going to spend extended periods at sea fishing, you might as well make sure you have all the comforts of home with you – and especially all the fuel you need to keep your smaller boats going, during local fishing expeditions.

With enough money, you can have all that, packaged in a massive, beautiful yacht. And money is of no consequence to tournament fisherman Brooks Smith, the current owner of a Heesen’s Vida superyacht. Vida was commissioned by Smith, who wanted a mothership for his sportfishing fleet, but one that wouldn’t be too big. He wanted to be able to cruise the world in it so he wouldn’t have to spend nights at port hotels anymore but, more importantly, he wanted a vessel large enough to act as a floating gas station for his smaller fishing boats.

This is how the 180-foot-long, fast-displacement Vida came to be. The superyacht was unveiled earlier this year and showcased at various boat shows after its debut at the Fort Lauderdale International Boat Show, and then handed over to the new owner last summer. Since it is privately commissioned and owned, details on its price have not been made public, but pretty much everything else is well documented.

With interiors by Be Design Associates, Vida is all about showing off, while maintaining a certain air of elegance and sophistication. Smith says he’s into minimalist interiors, but not in black and white, so he got a boat furnished in soft hues of brown and beige, in combination with smoked glass, mirrors and polished steel. The result is a cozy but somewhat masculine interior.

Vida is far from a regular luxury yacht, and not just because it can carry 27,000 gallons of diesel, enough to take it from Florida to Bermuda, and act as a floating fueling station for the owner’s smaller boats. Smith’s Bayliss 60 and Bayliss 68 fishing yachts can run for several days in isolated locations thanks to Vida’s large gas storage capacity, so he and his crew can go on extended expeditions without having to dock.

It has anything from a floating staircase to a wine cellar, and a pool with a waterfall, in addition to expansive staterooms, large dining and lounge areas, and solid performance on water. Speaking of performance, Vida is fitted with 2 MTU 8V 4000 M63 Diesel engines, can reach top speeds of 16 knots and a range of 4,500 nautical miles at a cruising speed of 13 knots.

The standout feature is backlit ivory onyx arch frames that serve as a wine cellar for a 42-bottle collection. All the bottles point towards the dining area, and are meant as “a welcome for Vida’s guests, with the bottles pointing inward to the stunning saloon like myriad signposts,” Heesen says. Vida is also fitted with a statement floating staircase, which is also made of backlit ivory and alternating strips of fumé mirror, combined in “an incredibly intricate design that recalls the geometry one can create with Meccano pieces.”

The superyacht can accommodate 12 guests in 5 spacious staterooms on the lower deck, and has room for a crew of 13. The owner’s suite spans 860 square feet and is on the main deck, furnished lavishly in the same warm, earthy hues.

When they’re not working on their tan, passengers can chill in the pool that includes its very own “mesmerizing” waterfall, situated on the partly-covered sundeck. At night, the same sundeck turns into a club, thanks to state-of-the-art LED lighting fitted into the pool, a starry ceiling and an in-built wet bar. Party on, fellow fishermen!

A fully equipped gym and a large fixed platform for easy access at sea for swimming and water games are also included. To put it in much simpler words, Vida is the kind of vessel where you might never grow bored, even if you tried your darndest to. 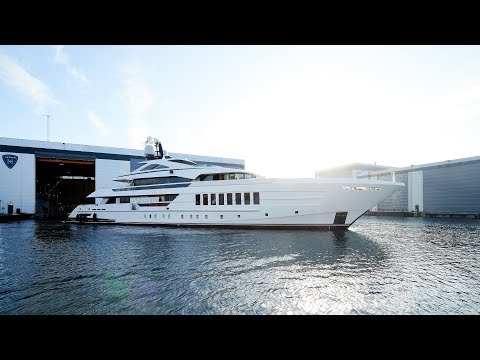