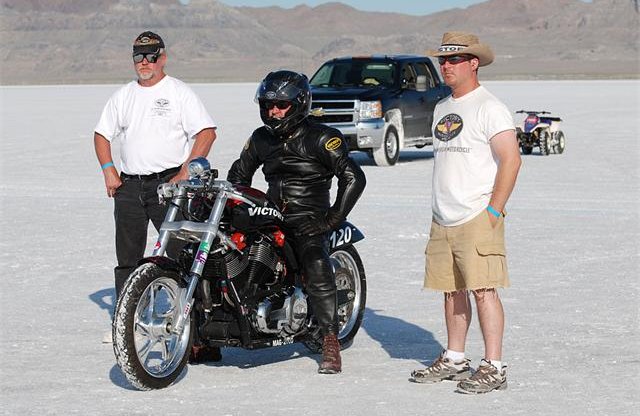 Ridden by Gregor Moe, a Victory Kingpin motorcycle managed to set a new national speed run record of 165.8 mph during the BUB Motorcycle Speed Trials on the Bonneville Salt Flats. The record was set for the 2000-M-AG class, which includes bikes of up to 2,000cc with modified frames that are gas-powered but do not use turbochargers or superchargers.

“This was my third time at Bonneville. I went out in ‘04 to the first BUB event with a buddy and ran my 2003 Victory Vegas at about 119 mph in the ‘Run What You Brung’ class. That was the fastest Victory pass for a number of years,” said Moe.

Moe ran the bike at the Maxton Mile earlier this year and attained a speed of 159.7 mph. “Maxton was our shake-down to make sure the bike works,” Moe said. “Of course, the driver’s got to get familiar with the machine to make it go, and we made several passes there and it got better every pass.”

After Maxton, the bike underwent some minor changes such as a redesigned custom seat before the Victory Riders “Sparky Bill” Toninato, Jeff Ingebritson and John Ritter headed to Bonneville.

The Kingpin motorcycle featured a Victory Freedom engine that had a modified displacement of 110-cubic inch and a Lloydz cam package, intake and fuel mapping. “Setting a new record makes the ride home from the salt a lot more enjoyable,” Moe said. “If we had finished second, the drive home to Minnesota would have seemed like an eternity.”