Victoria Beckham Looking Over Her Boys From Her Jaguar 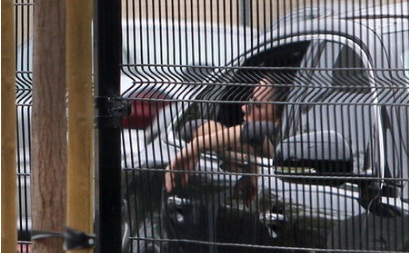 Victoria Beckham was spotted in the back of her black Jaguar, perched out of the window. She was looking at her two boys playing a soccer game. While most parents have to get up early to prepare lunch, ready their kids' equipment and drive them to practice in a horrible old minivan, that is not the case if you are a celebrity. The ex-Spice Girls member doesn’t have to lift a finger.

If you had a luxury Jaguar with a chauffeur you wouldn’t need to sit down at he parents’ bench and do light chatting about the latest cooking recipes and what was on Oprah last night. Instead you can sit in a seat made of the best cow-hide on offer, drinking some tangy refreshing juice cooled in the car’s cooler and listen to some new tunes from the onboard 60GB sound system.

Victoria has said that her sons with David are very different from each other. Eldest son Brooklyn looks set to follow in his dad’s footsteps: “Brooklyn is the most amazing footballer. He managed 17 keepie-uppies the other day which for a boy his age is quite incredible. All he wants to do is play football and we’re always kicking about in the garden together.”

Middle son Romeo looks like he might follow his mum down the pop and fashion route: family friend Elton John sent the 8 year old a karaoke machine for his birthday because he “loves singing” and “he’s so into his looks it’s something else. He’ll say ‘Mummy, I want to wear this hat with this outfit’ and he won’t leave the house until he’s looking just right.”

The youngest of the three, five year old Cruz is the more normal of the three, he is an “intelligent little boy”, who like to learn everything he can.