5 Buying a BMW E92 M3 Will Ruin Your Life
Car video reviews:
Up Next

Here's a Gorgeous Wooden Model of the Most Recognizable Pickup Truck, You Know What It Is

Here’s a proper driver’s car that we haven’t covered in a while: the E92 BMW M3. The predecessor of the first-ever M4 Coupe was the last of its kind to feature a V8, and the blue example that you are about to see on video down below has received a few modifications.
6 photos

A new cold air intake, an aftermarket exhaust system and a Stage 2 remap have boosted the output to 430 brake horsepower, according to the owner, or a bit more than the stock model. It rides on sticky tires, weighs roughly 1,600 kg (~3,530 lbs), and it still is a dream machine.

But can it actually beat a Vespa in a straight-line sprint? How can we ask that, of course it can, can’t it? After all, we’re looking at a high-performance German vehicle that has been tuned, rocks a V8 power unit, is rear-wheel drive, and uses a dual-clutch automatic transmission for faster gear shifts.

In the green corner, on the other hand, lies one special scooter: It started life with a 4 bhp engine, and a 29 mph (47 kph) top speed, but since then, its owner has done a lot of work. As a result, its 150 cc single-cylinder mill is now capable of pushing out 43 brake horsepower. It tips the scales at 85 kg (187 lbs), and with the rider, it has a very similar power-to-weight ratio to the BMW M3 and can run the quarter-mile about as quick as its four-wheel ad-hoc rival.

This calls for a drag race, and the peeps at the Officially Gassed YouTube channel organized no less than six of them, three from a standing start and three from a rolling start. So, do you really think that this angry-sounding moped can give the mighty M3 a run for its money? One thing is certain, you will be surprised, as was the owner of the Bimmer once he saw what the Vespa is capable of. 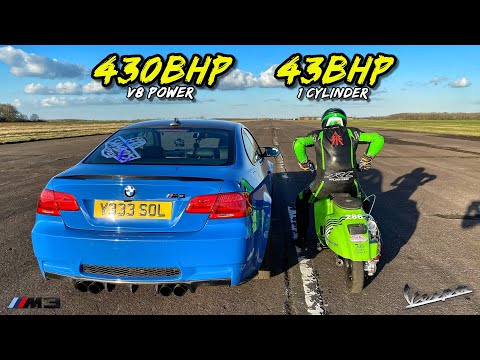