1 Inspired by Vintage Supercars, This C1S Electric Scooter Is Ready for Summer

4 The Vespa Elettra Concept Brings the Classic Into Modern Times

Vespa celebrates its 75th anniversary with a display of some of its most iconic and beloved scooter models ever released.
6 photos

Since it’s the 75th anniversary, 75 Vespa scooters will be showcased at the Autoworld Museum in Brussels, and you can feast your eyes on the Italian vehicles until August 15.

Vespa scooters were manufactured in multiple European countries in addition to Italy, such as France, Germany, Belgium, and Spain. The scooter that has become a global brand can be admired in some of its rarest, most prestigious versions, including a number of Ape three-wheelers, scooters with sidecars, the latest Vespa 946, Elettrica, and of course, the star of the show, a special-edition Vespa 75th, brought specially for the exhibition.

Piaggio’s two-wheeled wasp was born in 1946 in Pontedera, Italy, with a stress-bearing body, direct drive, a single-sided swingarm, and the gear shift on the handlebar. It soon became the symbol of freedom, a worldwide appreciated vehicle for individual mobility. Vespa saved riders from congested traffic, while also being an antidote for city pollution and offering a cool transportation alternative, especially for the younger generation.

Since its launch, Vespa has spawned sales of more than 18 million so far.

Today’s Vespa is equipped with modern, ecological features, as is the case with the Elettrica model, a revolution on two wheels, as the company likes to call it. The scooter comes in two models, one that offers a top speed of almost 28 mph (45 kph) and a faster one that can reach 43.4 mph (70 kph). Both models have a range of up to 62 miles (100 km) in Eco mode and a range of 43.4 miles (70 km) for the faster version and almost 50 miles (80 km) for the slower one, in Power mode.

Adapted to the times in which we live, Vespa Elettrica features a digital color TFT dashboard and comes with the Vespa MIA multimedia mobile app, turning the scooter into an extension of your phone via Bluetooth connectivity. 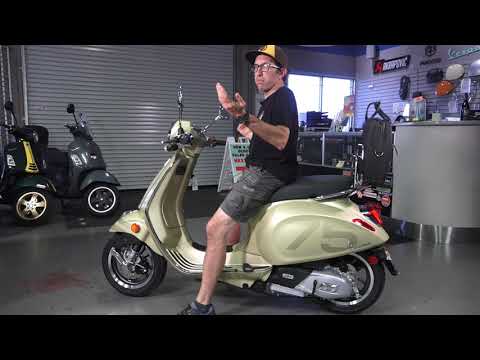