2 Study: Only 1 In 5 Men Would Act Like Tom Hardy In A Bike Theft

4 This Bike Lock Doesn’t Use A Key, Just Your Smartphone

5 The First Bike Lock That Fights Back Will Soon be on the Market
Car video reviews:
Up Next

Tesla Insurance Rates to Go Up by 30 Percent, the Company Calls Foul

Vespa Gets Stolen From Dealer Showroom In London

Scooter and motorcycle thefts in the United Kingdom are really getting out of control lately. The latest case happened in West London where a thief snagged a Vespa right off the dealership floor in plain daylight.
1 photo
CCTV footage shows a man entering a dealer showroom in Ealing, West London, and starts to look around for the staff which oddly isn’t there. He then goes to a Vespa scooter, checks it out and casually pushes it out the door.

More footage from an outside surveillance camera shows the thief speeding away on the scooter, which means it was sitting on the showroom floor with the keys in.

The theft happened on May 30 at 17.12, with the scooter in case being a Vespa GTS 125 Super in black. Some camera angles mange to show the perpetrator’s face quite well, so anyone with info is asked to call 020 8579 2227 or the Metropolitan Police.

This really shows how opportunist thieves are. It doesn’t really matter if its day or night, if your bike or scooter is parked without protection, they won’t hesitate. Hell, this whole new dealer stealing is even more annoying based on the fact the location was packed with security cameras.

So, if you park near a security camera, don’t just trust it’s a safe spot. These scums have no fear and usually wear face masks and helmets which makes it almost impossible to ID.

Always lock your handlebars and tie your bike/scooter to a solid object like a lamp post or sturdy fence. Try using a thick chain and a massive lock to make it harder for the thieves to cut.

You should also run the chain through an important part such as the frame and never let it sit on the ground as it will be easier for them to cut it.

Ultimately, you can fit a GPS tracker in a hidden location on your ride. Thieves have found ways to block them, but it requires more preparation, and most of them are lazy. Otherwise, they would work for money. 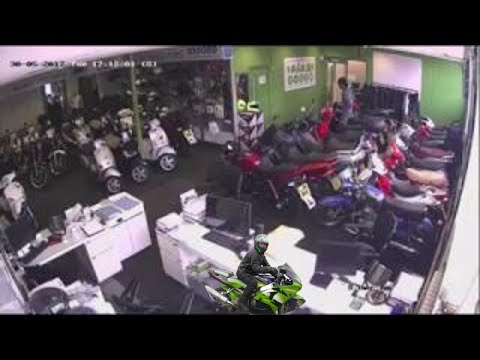