2 Vertical Aerospace Sells 500 eVTOLs in Less Than a Year, Confirming Its Leading Position

5 The eVTOL Developer With the Largest Number of Pre-Orders Gets Closer to Certification
Car video reviews:
Up Next

Ford Bronco Goes Hybrid, Hybrid Forged That Is, With Help From Vossen

Like most eVTOL (electric vertical take-off and landing) aircraft developers out there, Vertical Aerospace is also yet to fly its air taxi. But even so, the U.K.-based company seems unstoppable when it comes to sealing deals, constantly expanding its list of partners and taking pre-orders. One of its latest collaborators is Babcock International, an aerospace, defense, and security company that wants to explore new applications for Vertical Aerospace’s VX4 aircraft.
6 photos

While the VX4 eVTOL has mostly been advertised as a game-changer in urban air transportation of passengers, promising to be no more expensive than a conventional taxi, Babcock and Vertical Aerospace plan to explore how the aircraft can be used for applications such as aerial EMS (emergency medical services) and cargo transportation. Moreover, in the future, they also plan to use the eVTOL concept to support the armed forces with medium range logistics delivery.

Switching to Vertical Aerospace’s eVTOL will help reduce the carbon impact of these types of operations, while also keeping operational costs low.

EMS are right up Babcock’s alley, with the company boasting 35 years of experience in the field and performing thousands of missions globally every year. Not just that, but it also claims to be the largest HEMS (helicopter emergency medical services) provider in the U.K. Vertical Aerospace could improve these services by providing fast and convenient transportation between hospitals or by attending accidents.

In addition to presenting itself as a cleaner air mobility alternative, the VX4 eVTOL also boasts of being 100 times quieter than a helicopter at cruise (45 dB) and hover (60 dB). It has a capacity of four passengers and one pilot. The VX4’s fuselage was developed in partnership with Leonardo and the powertrain in partnership with Rolls-Royce. The flying taxi says is able to hit a top speed of 202 mph (325 kph), which means it could transport passengers from Heathrow to London in just 12 minutes. The VX4 offers ranges of over 100 miles (160 km) per charge.

Back in February, Vertical Aerospace announced that it has the top pre-order book in the industry by value, selling 1,350 air taxis, worth $5.4 billion. Now that number has grown to over 1,400 aircraft pre-orders from global customers. Vertical Aerospace’s eVTOL is scheduled to enter into service in 2025. 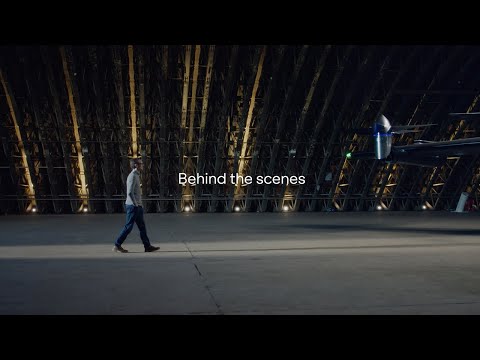