2 Dropracks Roof Rack Is a Game-Changer, Can Be Lowered so You Can Easily Load Your Gear

3 Light as a Feather and Solid as a Bull, This Claims to Be the Most Compact Bike Rack Ever

5 This Device Promises to Make Everybody Forget About Bulky Bike Racks
Car video reviews:
Up Next

Veloroof Says Is the Guardian Angel of Your Bike, Protects It While It's on Your Car Roof

While there’s a wide variety of bike racks to choose from for transporting your two-wheeler on top of your car, few companies have thought about developing a device to protect the bike from crashing into any overhead obstacle. Not just that, but sometimes we tend to forget that we have the bicycle up there and a warning device that can serve as a reminder could prove to be extremely valuable.
8 photos

Veloroof was developed by a Spanish company and is described by its manufacturer as “the guardian angel of your bike” and the first distance sensor for your bicycle rack.

The device was designed last year, with Andre Jaramillo, the founder of the Veloroof company, explaining that he came up with the idea for the sensor after he returned from a family trip to the beach. His bikes were on the car roof but he forgot they were up there and entered a parking lot with a limited height. You can easily figure out the outcome and let’s just say that two innocent, high-end carbon bikes were destroyed beyond repair. But the silver lining was that out of the horrific accident, the Veloroof was born.

The Veloroof is a distance sensor that offers both sound and light warnings. The device is easily detachable and can be mounted either on the bike itself or on the front of the bike rack. It uses a patented system that helps drivers prevent the collision of the bikes carried by car, whether they are transported on the car roof, or in the rear. It can also be used with trailers, motorhomes, and more.

Veloroof comes with long-range Bluetooth and works by using its sensor to measure distance and height and then sending the pocket receiver sound and light alerts. The sensor detects obstacles up to approximately 65 ft (20 m) in front of itself and at an upward angle of 45 degrees.

The distance sensor is now available on Indiegogo and you can get one for $54. The estimated shipping date is this December. 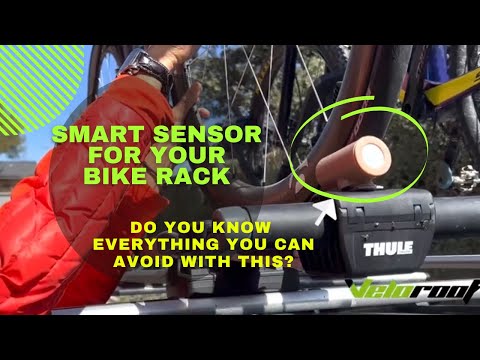