Blue Oval fans currently have their eyes peeled for more 2021 Ford Bronco Easter Safari custom action in Moab, Utah. But let’s take a step back in time with RTR head honcho and Drift/Ultra 4 champion Vaughn Gittin Jr. to the earlier days of “King of the Hammers.” Believe us; it’s well worth it.
53 photos

We’ve seen lots of walkarounds, some of them even involving the first of just 7,000 First Edition 2021 Ford Broncos. Some of them were good, some were mediocre, others were just plain bad or uninteresting. So, here’s a lesson in properly doing such a feature with both enthusiasm and true street (or, rather off-road, in this case) credibility.

Sure, we know that Gittin Jr. is closely associated with Ford, so he’s got direct access to their resources. But let’s be frank, so is The Bronco Nation “independent online community” team, and we haven’t seen them deliver such great pieces even when the Bronco they’re showing has us checking the bank account to shell out the advance.

While these days Gittin Jr. and his fellow “fun-haver” Loren Healy are preoccupied with other Bronco-related stuff like reaching the Top of the World Trail in Moab, the former just shared a behind-the-scenes perspective on the more technical points of the new off-roader.

The video was shot during the KOH days, but it really doesn’t matter—Johnson Valley is just as great for off-roading and rock crawling as Utah’s Moab. By the way, the walkaround features a 2-Door First Edition fitted with the company’s RTR Tech 6 wheels and a set of Nitto grapplers, and the Area 51 unit also comes with the 2.7-liter EcoBoost.

The presentation is tame enough in the beginning before Vaughn arrives at the interior part and doesn’t showcase much since it’s “pretty dirty because we’ve been rippin’ around Johnson Valley.” Naturally, the footage cuts off to the 2-Door throwing dirt everywhere with one tire in the air.

From the 2:30 mark, he talks a bit about the accessory preparedness before reaching the 3:15 mark where he explains that both him and Healy “have been extremely impressed with the Bronco and its capabilities” only to again cut to prior footage showing a five-time Ultra 4 champion and double KOH winner (a.k.a. Loren Healy) looking a bit scared!

Now for the really technical stuff as Vaughn moves from the 3:43 mark to a cutaway chassis of the SUV and more excerpts of the First Edition steaming full throttle through the desert. He even pinpoints special stuff such as the electronically disconnect sway bars, off-road modes, or the Trail Turn Assist. Each gets its practical demonstration from the 5:07 and 6-minute marks. 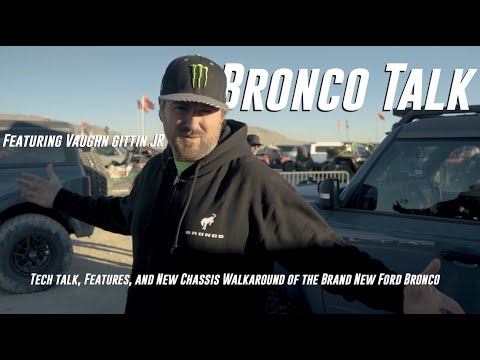