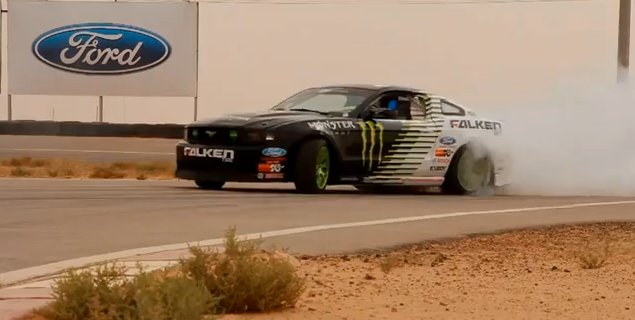 “Lord of the drifts” Vaughn Gittin Jr. participated earlier this year at the Drifting In The K.S.A car festival in the Saudi Arabia bringing along his special factory-sponsored stallions. Gittin Jr. basicallystarted the event in a Boss 302 before unleashing his Falken Mustang.

After the show ended the received the “green light” to make the run of the Al Reem Circuit in his own personal way. Included in the spectacle there were also a few close “meetings” between the Mustang’s rear bumper and a GoPro camera which captured the “magic.” The camera has suffered a couple of minor damages. The show that was put together by Gittin Jr. would definitely make his fellow team mate Ken Block very proud.

"Aside from drifting the entire complex, one of my most memorable parts of the whole trip was after we finished shooting and we were hot, dusty, and dead-tired, we ended up putting on a impromptu drift-day with some of the locals that came to spectate the shoot. I was teaching them how to drift, change tires, different driving techniques, and they were so pumped up"  Vaught Gittin Jr. posted on his personal site.

"While there were no pro’s to show us the ropes back in the day, it reminded me of when I first started; that smile that stays when you link your first drift and the genuine passion to get better and conquer the challenges. I had a blast hanging out and enjoying what drifting is all about!,” he added.