4 The Buick Blackhawk, a Most Beautiful Frankenstein, Is Coming Up for Sale

5 One-Off Pagani Huayra Pearl Damaged in Crash for the Second Time
Car video reviews:
Up Next

Mat Watson Thinks You Should Buy the 2022 Tesla Model S Plaid, Has an Order Waiting

Vans are supposed to be reliable and well-suited for the job of hauling people and cargo around. The very idea that they could be fun or aesthetically pleasing comes across as surprising, so here’s one for not judging a book by its cover.

That book is called VanSlam and the cover is in all shades of green and gold-specked yellow, and rides low on the ground. VanSlam is a lowrider, but it’s perhaps one of the most surprising lowriders on the custom scene because of the basis vehicle. Almost two years ago, Street Muscle Mag called it the “current benchmark of kustom vans,” and that probably tells you all there is to know about it.

VanSlam is the creation of Gary Villeggiante of California’s Sin Nombre custom shop, and his pet project. He invested more than two years of work and money into the project and, as Gary himself explains in his most recent interview with Barcroft’s Ridiculous Rides, it’s his way of proving to the world that you can make a lowrider out of a van, contrary to public opinion.

“New cars do nothing for me. Older ‘50s, ‘60s, ‘70s cars, they all were unique,” he says. “They all had their own flair and they said a lot about a person. Lowriding to me is very unique, very personal. Some say you can’t build a lowrider out of a van. I say, ‘Watch me’.”

VanSlam first made a splash on the custom scene in 2019, when it started appearing at trade events. With the 2020 Grand National Roadster Show and the 2020 Sacramento Autorama, where it earned top distinctions, it cemented its position as one of the coolest, if not the coolest, van out there – and Gary’s reputation for building a truly unique vehicle.

He didn’t do it on his own, though. Gary spotted the 1967 Ford Econoline Falcon Club Wagon and started working on it right after bringing it home. It wasn’t in the best shape but, surprisingly, it was not with major defects, either. The engine was replaced with a Chevy 4.8-liter that develops 300 hp and is mated to a 6-speed automatic. Gary says that making the powerplant “fit in” was perhaps one of the biggest challenges of the project.

The paintjob, which is arguably among the first things you notice about VanSlam, is the work of Tyler Pullen of TP Custom Chop Shop. Tyler reached out to Gary to let him know he wanted to paint his van after seeing it around, and this was the kind of offer he couldn’t refuse. It took Tyler another 15 months to get the combination and the patterns right, and if you look closely at any of the photos in the gallery above, you will understand why. The VanSlam may be loud from afar, but it’s a work of art if you look closer.

The exterior is different shades of green, from lime to deep mint, mixed with sparkly goldenrod and silver, and in between geometric patterns, you have a section filled with ferns. The exterior, by Acme Auto Interior, is just as startling, albeit a tad more subdued than the exterior. It’s also mostly original, but the seats have been upholstered in a biscuit-patterned velvety green, as have been the side panels. Contrasting elements, such as the steering wheel and sections of the dashboard, are in the same lime green and turquoise found on the exterior.

All chrome work was done by The Best Chrome in San Martin, California, and you get flickering disco lights in the front, a custom grille, and lit wheels. Let’s just say that, whatever expectation you have of VanSlam when you first lay eyes on it, VanSlam delivers on them. And then some.

Gary says that VanSlam looks like a fun car, and is one in real life too. Wherever he goes (and he goes to a lot of places, since VanSlam is one of his most popular builds, alongside Disco Van and Van King, both of which have self-explanatory names), he gets attention, and he gets to put a smile on people’s faces. The best part, though, is that he’s able to accomplish all this by doing something he loves for a job. What could possibly top that? 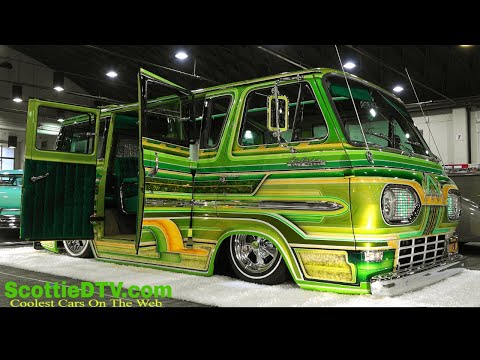 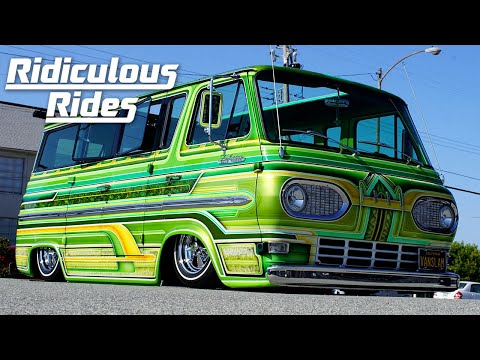