3 Marc Coma Details the Dakar 2017, Waiting for Valentino Rossi to Join the Rally

It's been some time since Yamaha showed to the world their top motorcycle-related project, Motobot, and things have not been idling. In fact, Motobot reached the race track, as Yamaha said it would, and is now taking lessons from one of the best riders in history, Valentino Rossi.
13 photos

And because having Rossi involved in anything that deals with anything else than racing for MotoGP glory is hard to keep on the sober side, here's a funny short documentary that reveals how the Doctor is helping Motobot become a better rider.

Various robots that can take care of the variables incumbent to operating a vehicle are not a new thing, but Motobot introduces a new technology. Yamaha designed this robot to operate an unmodified motorcycle, at least as far as controls are concerned.

Side stands and training wheels are still present on the YZF-R1M, but they would be installed on any other bike Motobot can ride. Special parts simulate a human rider's hands and feet, so that Motobot can twist the throttle, shift gears, use the clutch and both brakes like any of us would.

Yamaha aims to have Motobot riding on a race track at speeds north of 200 km/h (124 mph) by 2017, and is also using input from Valentino Rossi. The nine-time world champion rides a sensor-laden R1M on the track collecting data Yamaha engineers then analyze and implement in the routines of their robotic rider.

Motobot takes all the decisions by itself, with no human input, and Yamaha is working hard to make it so good that they can remove those training wheels as soon as possible.

The ultimate goal may sound a bit crazy, but Yamaha wants to have Motobot racing against Rossi on the track. Regardless of who will win such a showdown, it is only then the dawn of an entirely new era in motorcycling will truly arrive. Enjoy the video! 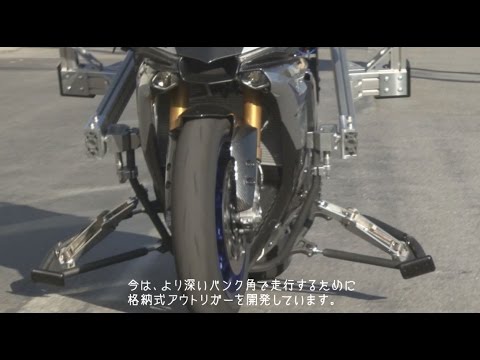 YAMAHA IT 490All YAMAHA models