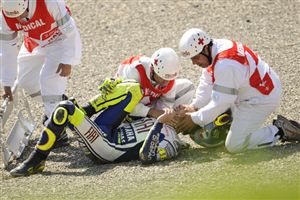 Valentino Rossi will miss the upcoming 6 weeks of the MotoGP following his violent crash in the final practice session of the Italian Grand Prix, at Mugello. The 7-time world champion suffered an open fracture to his right tibia and was taken to the Centro Traumatologico Ortopedico in Florence, where the he underwent a two and a half hour operation.

Although the doctors looked pretty optimistic about his future recovery, it’s still a fact that his return on the Yamaha bike will take no less than 6 weeks, marking the first time Rossi misses a Grand Prix due to injury in his entire career. However, this couldn’t have come at a worse time, as no less that 6 races are scheduled to take place in the MotoGP from now until the end of July.

“We received Valentino Rossi at the Careggi Hospital, where we made detailed checks in order to rule out any other injuries, and the results were satisfactory. We therefore decided to proceed with the surgery for the exposed fracture of the right leg,” said Dr Roberto Buzzi, one of the doctors that carried out the surgery procedures.

“We performed a spinal block (epidural) and cleaned and washed the fracture, which was then aligned and stabilised with a pin. The surgery had good results; the alignment was good and the bone is now stable.”

"The wound remains open, as is usual in these cases, and it will be stitched in the next few days with another short surgery. We are confident that Valentino will be able to leave the hospital in a week to ten days, able to put weight on the leg with the aid of crutches.”

"It is difficult to say how long the post-surgery rehabilitation will take, we need to evaluate the progress of the patient and also what the x-rays will show. But I think that we can reasonably think of six weeks partial weight-bearing with crutches, after which Valentino needs to be re-evaluated, according to his feedback and further x-rays.”