You can't beat a good old V8, right? Isn't that how the saying goes? Well, the automotive industry is changing so the sayings would better keep up or risk becoming the butt of the joke, together with whoever is using them.
8 photos

Another one of the classics claimed there was no replacement for displacement. That may have been the case 40-odd years ago because nowadays you have plenty of options to choose from: turbocharging, supercharging, adding one or more electric motors, or just mixing all of them up.

The race you are about to see is textbook material for debunking both of these tropes that have been around for ages. It basically pits two vehicles against each other, except one of them decides to show up under two different personalities. On the one hand, there is the Lincoln Navigator, here in its 2019 guise, and on the other, GM's largest SUV platform, represented by a 2021 Cadillac Escalade and a GMC Yukon. The latter is sporting a shorter wheelbase, which is basically the only reason its presence in the race is mildly relevant.

Despite the older model year, when it comes to their powertrains, it's actually the Navigator that represents the future. The Ford Motor product uses a 3.5-liter twin-turbo V6 engine producing 450 hp and 510 lb-ft (690 Nm) of torque. If those numbers seem familiar, maybe it's because you've also seen them on Ford's F-150 Raptor's specs sheet.

The GM representatives, on the other hand, use the company's bread-and-butter 6.2-liter naturally-aspirated V8 unit, this veritable dinosaur that still does its job so well despite the age. It means the two SUVs have 420 hp and 458 lb-ft (620 Nm) of torque to show for. That's only slightly below the Navigator's figures, but there's no getting around the fact they are still inferior numbers obtained from a much more massive engine.

The real question, though, is whether the gap, tiny or otherwise, is going to show up on the track, and the answer is a very definitive "yes." No two of the three standing races are the same, though that may not be entirely down to the vehicles but also Matt Watson's casual approach to one of them.

However, with virtually identical transmission options (ten-speed torque convertors) and very similar weights (the GMC Yukon, thanks to its shorter wheelbase, is about 450 lbs lighter while the other two weigh the same), it's ultimately the Navigator's twin-turbocharged powertrain that makes the difference winning two of the three races. We'd say the third one was won quite comfortably as Matt decided to build up the boost before launching, breaking the mold of having to come from behind and leading the race throughout.

The rolling race pulls the Lincoln Navigator back to Earth as the SUV finds it impossible to keep up with the GM pair. The Yukon is the first to cross the half-mile line but, soon after, it hits its top speed limiter. From the outside, it looks as though it hit an invisible brick wall. The Escalade follows immediately after, leaving the Navigator to eventually pass both of them.

The final challenge is the brake test. Carwow videos usually feature an emergency braking maneuver from 70 mph, but this time they went for the full 100. We have no idea why, but we're kind of glad that they did because it provided us with a hilarious piece of comedy. The Yukon and the Escalade both seem to perform almost identically (still, the heavier Caddy stops over a shorter distance, hinting at a better braking system), but the Navigator seemingly mistakes this trial for yet another drag race as it keeps going until it enters a different zip code. Speed is nothing without control – here's one car-related saying that this clip isn't destroying, but rather reinforcing. 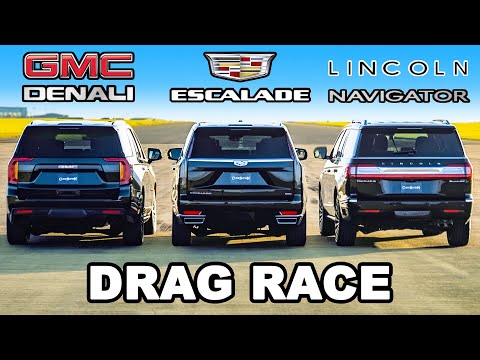