This Porsche Macan GTS may have been treated a little too much like an actual SUV. But its new owner happens to be one of the biggest people in the world of YouTube car detailing and was only too happy to make a video out of its "restoration."
12 photos

AMMO NYC has been doing this type of content for a decade. You can put your vehicle through an automatic car wash, but there's just something relaxing about watching everything being done by hand, with attention to detail. We think of it as ASMR, only without the whispering.

The YouTuber is clearly a Porsche guy but needed something with a little more daily usability than his old 911. So he picked up a 2017 Macan GTS, and because of the condition it was in plus a little bit of negotiation, he says he managed to get it for over $7,000 below its KBB value.

Don't get us wrong, there's nothing wrong with the car, at least not something that can't be buffed out. The GTS is a really nice choice too, quite sporty, and fitted with a special V6 made by Porsche. It's fun to drive and sounds better than any six-cylinder SUV we can think of... other than the Alfa Stelvio.

The first step was cleaning the brakes of built-up dust. This is done using a small brush, but later in the video, he also puts a 1-inch polisher wheel to work on them. The bodywork is covered in soap to loosen up the dirt. It's quite shocking to see this being done under the hood as well and beneath the underbody shields.

The paint is what we would have called "good condition," but when you're a detailing specialist, a few swirls might drive you nuts. So these get bugged out from the silver coat, while touch-up paint is used to correct some minor dings.

A few upgrades were also made, including a new set of performance tires and a module that lets you lower the air suspension quite a lot. 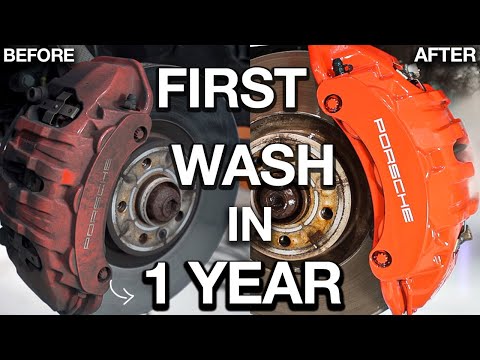