1 BMW M760Li vs. M3 Competition Drag Race Proves V12 Are Better Than Everything

5 BMW i8 vs Porsche Carrera S Drag Race
Car video reviews:
Up Next

1 photo
We're all tempted by those used BMW M cars. For the same money as a new Honda Civic or VW Golf, you could be sitting behind the wheel of your own drift machine.

The reliability issues and maintenance costs have been extensively covered by the web, but we haven't looked at the speed aspect in a long time.

Here are three cars that wear the M badge yet have completely different levels of performance. The smallest and cheapest is the M135i.

This car is a combination of hot hatch and a GT. The last rear-wheel drive hatchback that will probably ever be built has a giant single-turbo 3-liter under the hood. In stock form, it makes 320 horsepower for a 0 to 100 km/h sprint time of 4.9 seconds (4.7s with xDrive which isn't available in Britain).

Of course, the inline-6 is a tuner's delight, and this one came to the party with 390 ponies thanks to a Birds tuning kit. Should we really care that this 1.5-ton car isn't a real M car? Probably not. In fact, the used prices suggest it's eventually going to be mildly collectible.

Next up we have a car that needs no introduction. About a decade ago, BMW went crazy, custom-building a naturally aspirated 4.0-liter V8 to better compete with the C63 of the time. It's the only M3 ever fitted with a V8, and we think it sounds brilliant.

While most of the 420 HP is at the top end, this 1,580-kilogram coupe is pretty fast even by today's standards.

And finally, we have an M sedan that you might not even consider to be old, the F10 M5. It's just been replaced by the all-wheel-drive generation, and you can pick one of these 560 horsepower speed machines for less than half of what it used to be worth.

The twin-turbo monster is way faster in the drag race; it just murders the other two. But it's cool to see the M135i keeping up with the M3 thanks to the tune. 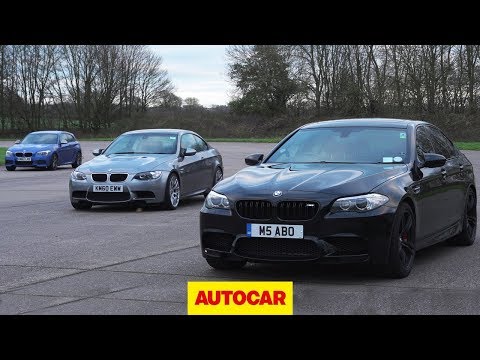