Home > News > Military Bits & Pieces
Otilia Drăgan
A new toy has officially joined U.S. Air Force’s increasing line-up of alternative air mobility vehicles. It’s not yet fully operational, but that’s only a matter of time, because it did get green light for moving to the next step, namely Air Force directed flight tests.
8 photos

AFWERX is a program office at the Air Force Research Laboratory (AFRL) that acts as an innovation hub for developing military capabilities, through partnerships with other players in industry and academia. The name of this office’s Agility Prime electric aircraft program says it all: the Air Force is interested in adding electric air mobility vehicles to its fleet, and 2 of the main criteria are rapid deployment and affordability.

This is the program through which a new eVTOL ((electric vertical take-off and landing) was recently awarded airworthiness approval by USAF. Called Heaviside, this aircraft was developed by Kitty Hawk, a company that has been playing with innovative flight technologies for over 10 years now.

What makes Heaviside particularly interesting? This single-passenger aircraft (named after English engineer Oliver Heaviside) is supposed to be a fast, quiet and sustainable alternative air vehicle. With its 8 variable-pitch electric propellers, it can reach a maximum speed of 180 mph (289 kph) and a range of 100 miles (161 km) on a single charge. And it accomplishes this with half of the energy per mile requirements of an electric car.

It can operate in autonomous flight mode or can be piloted remotely, which makes it more versatile. Plus, it’s almost silent. With a sound level of 38 decibels at 1,000 feet (304 meters), this eVTOl is 100 times less noisier than conventional helicopters, according to the tests performed by Kitty Hawk.

Starting now, AFRL engineers and other military stakeholders will supervise the upcoming flight tests for Heaviside, which recently became the first eVTOL to be deployed in an AFWERX medical evacuation exercise.

According to AFRL, future military and commercial applications for Heaviside, including search and rescue missions, are currently being evaluated. 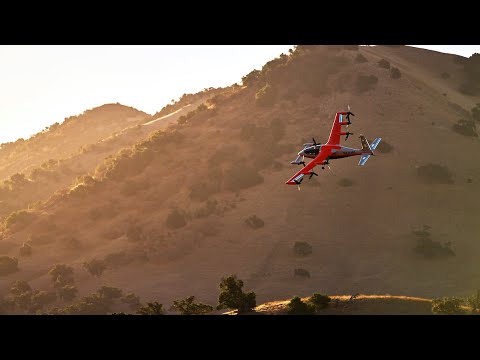