5 F-35 Lightning Looks Like It’s Vaporizing After Something Like the Thanos Snap
Car video reviews:
Up Next

Five F-16 Fighting Falcons flying in formation in close proximity is a sight to behold. It must also be a very loud experience if we are to judge by how deep this guy’s fingers are shoved into his ears.
16 photos

What you’re looking at is a photo taken during the Great Tennessee Air Show at the beginning of June and published last week by the Air Force. It shows, up close, three aviators walking on the tarmac as the five airplanes perform a flyover nearby. It's a perfect fit for our Photo of the Day section, and an opportunity to learn a thing or two about the USAF Thunderbirds.

That’s the name of a demonstration team flying Fighting Falcons “for people all around the world to display the pride, precision and professionalism the U.S. Air Force represents.”

Created in 1953, just six years after the USAF was established, the Thunderbirds are the third-oldest such formation in the world, after the French Patrouille de France and the all-familiar Blue Angels. Their first aircraft was the F-84G Thunderjet, and it was followed by the F-100C Super Sabre, F-4E Phantom, and T-38 Talon.

The Thunderbirds are at the center of one of the biggest demonstration team disasters, and these Talons were involved. In 1982, during practice for an air show in Indian Springs, while attempting a maneuver called four-plane line abreast loop, four of these planes slammed into the ground, killing the pilots.

The maneuver in question called for the planes to climb side by side to several thousand feet, perform an inside loop turn, and head for the ground at speeds of 400 mph (644 kph), leveling off at just 100 feet (30 meters) above ground.

That time, the team didn’t level off, and it was found that a jammed stabilizer on the lead jet prevented it from going horizontal. Following their training, the pilots of the other three planes didn’t question the maneuver and didn’t break formation, following their leader straight into the ground.

After a short hiatus, the team was re-established, this time fielding F-16 fighting Falcons, and has delighted countless crowds at air shows around the world. It now comprises twelve pilots, backed by a force of about 120 enlisted personnel. This year, the USAF Thunderbirds flew at five air shows, and more are coming.

Below is the official Thunderbirds presentation video, in case you didn't get to experience these guys first hand until now. 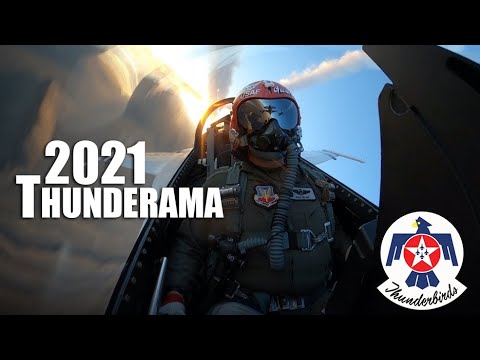