5 Oshkosh JLTV Gets the Thumbs Up from Military TV
Car video reviews:
Up Next

U.S. Army 1990 AM General Humvee Looks Ready to Take on Saddam All Over Again

The full name of this AM-General-made military machine is High Mobility Multipurpose Wheeled Vehicle. Soldiers call it HMMWV, but the rest of the world came to know it as the Humvee, and for a good reason, came to mistake it for the civilian Hummer.
23 photos

AM General started making Humvees in 1983, and it does so even today. Over 280,000 of them left the assembly lines since entering service, making the multi-purpose machine one of the most widespread military vehicles on the planet. There are countless variants out there, from the omni-present troop carriers to the more specialized ones like TOW missile carriers and ambulances.

The line of vehicles first saw action during the U.S. invasion of Panama in 1989 but became famous in the 1990s, when America launched Operation Desert Storm against Saddam Hussein’s Iraq. After seeing what it was capable of, the idea of a civilian version was born – two years later, the Hummer hit the market.

Being that many of them, Humvees are bound to retire at one point, and when they do, they generally transition to civilian life and flood dealers’ lots. Stripped of their military hardware, of course, and most of the time lacking any details of the operations they were part of.

The same can be said about this one here. Listed for sale on Gateway Classic Cars, it is an HMMWV of the M998 variety. That would be the one designed with cargo or troop-carrying in mind. Wherever this one might have been, it is now shown in its dress uniform, Camo Green, and wearing all the fine touches that make it an interesting proposition, down to the warning labels inside the cabin and two mock grenades dangling in there.

Powered by its original 6.2-liter diesel engine, the Humvee is looking for a new owner. The asking price for the stripped-down military machine is $26,000. 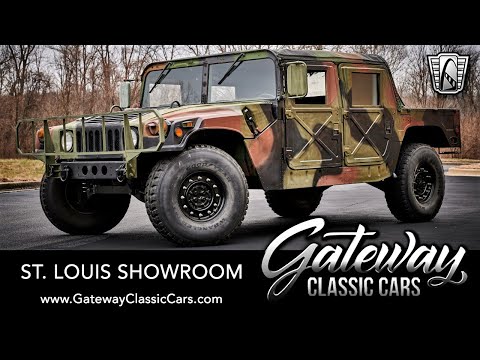