3 Here’s the Arrival Car, a Ride-Hailing EV With a Glass Roof and Roomy Interior

Home > News > Videogames
Cosmin Vasile
Simteract, the Polish studio behind Train Life: A Railway Simulator game, has just announced yet another transportation-focused simulator that puts the player right and center: Urban Venture. If you’re fed up with working to make someone else rich, maybe starting your own raid-hailing business is not such a bad idea, especially if you like driving cars.
11 photos

Urban Venture claims to be the first-ever realistic ride-hailing tycoon simulator, so if you’ve always wanted to play as an Uber driver, this is likely to be the game that will fulfill your dreams. In Urban Venture, players will be tasked with transportation assignments, but they will also be required to hire personnel, maintain a fleet of cars and manage their business.

The game aims to offer “an authentic taxi driving experience.” As a fresh driver working in the ride-hailing industry, you will only have one cheap car to drive, and you’ll only be able to take jobs for existing companies before earning enough money and experience to build your own transportation empire.

There’s a bunch of assignments that you’ll be getting in Urban Venture, such as taxi jobs, food delivery, but you’ll also have to put up with random passengers’ wishes and obey driving rules.

Now, one of the most interesting aspects about Urban Venture is that it offers a 1:1 recreation of Barcelona, which means the game features a playable area of at least 20 km2/7.7 mi2, with recreated parts of the real city and over 200 of its most famous landmarks, historical buildings, parks, and sculptures. Having visited the city several times already, I’m quite anxious to see how accurate the game really is.

Urban Venture promises to offer deep customization and management tools to help players custom-build the looks of their character, brand, cabin, and maintain and upgrade their cars for better performance. Just like in real life, customers will rate the cleanliness of your car and extra services.

You’re not going to follow a set of missions, as Urban Venture is purely a sandbox game, so you get to choose how to play. For example, you can be a modern-day taxicab driver who earns money and experience points, or you can take on other challenges while roaming Barcelona in “free drive” mode.

The folks at Simteract announced Urban Venture would be coming to Steam in early access in Q4 2022 – Q1 2023 and will continue to expand features and world size. If you like the idea of being a Uber driver and owner of their own ride-hailing business, you can wishlist Urban Venture on Steam right now. 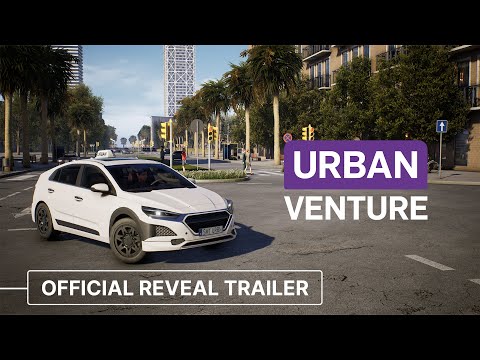