2 Fashion, Simplicity, and Affordability: Traits of the Ero 500 E-bike From Linus

5 What Do We Get When Spending Four Grand on the New Ducati e-Scrambler?
Car video reviews:
Up Next

If you do a quick search on the Trek Bicycle website for an e-bike that is aggressively equipped for urban riding, this is what you get, a full suspension electric mountain bike. But I asked for urban e-bike, not an e-MTB.

Ok, so I'll give them this. If what you want is an aggressive urban e-bike, then this is more than enough. The 2021 Powerfly FS 9 Equipped is, as I said earlier, a full suspension e-MTB that’s built for giving Little Red Riding Hood a chance to really outrun any juiced-up wolf. However, at $5,999, ol’ Red Hood is going to have to find a side gig before she can pick this up.

But why the hell should I dish out nearly six grand for an urban e-bike? Well let’s find out. Seeing as how Harley-D and Ducati just hit the scene with their own thousands of dollars e-bikes, this should be an interesting show to say the least.

When I look for an e-bike, the first component I point out is the frame. The FS 9 is completed using an Alpha Platinum Aluminum. Simply put, it’s an aluminum frame construction that can rival characteristics displayed even by carbon fiber.

The overall shape of the bike does resemble that of a trail crusher, but those fenders and cargo hold just take away most of its fury, making it look like grandma didn’t have her glasses on when she went out to ride with the ladies. On the side of the down tube, we can also see a removable integrated battery, which brings us to our next point.

Electrical power for the bike is offered by a Bosch PowerTube 625, the biggest the manufacturer produces, so you know range won’t be an issue. Speaking of that range, Trek makes no mention of it, and they do so with good reason. Because riding conditions vary greatly from one ride to the next, it’s quite difficult to gauge how far you can ride on a full charge. But judging from past experiences with this setup, we could assume you’ll get 60 miles of city riding. If it doesn’t, then Trek might be in trouble with the competition.

One thing is certain, if you have any doubts regarding power, don’t. A new Bosch Performance CX motor with 250W rating squeezes out a whopping 85 Nm (63 lb-ft) of torque and will carry you and your cargo around at speeds of 20 mph (32 kph). If you haven't had a chance to watch the video below, do it. You’ll enjoy it just as much as I did.

Take one wild guess as to who is supplying most of the other components on the bike. Yup, it’s trusty Shimano. Everything, from cassette to derailleur, shifter, and even chain is covered by the crew. Oh, yeah, the brakes too are from Shimano. XT M8120 four-piston hydraulic disc with 6-bolt 203mm rotors twill be sure to help you stop on a dime if needed.

One thing I stayed away from mentioning, as this bike is a bit more than an urban rider, is the suspension. The front fork includes an SR Suntour Zeron with 120mm of travel, while the rear is covered by a RockShox SID Lux Select+ with 190x45mm of soft landing.

Personally, I agree with Trek, it’s not really just an urban rider, and it’s not really a MTB. But rather one of the sweetest and most capable all-around e-bikes I've seen in a while, minus the fenders and cargo carrier of course. 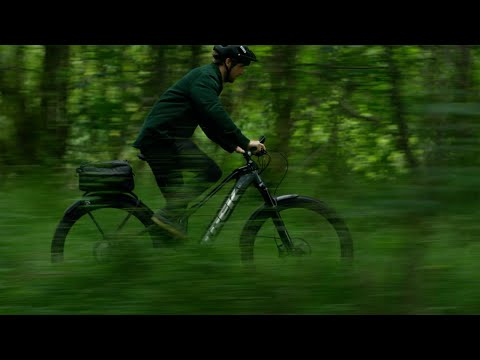