With this year’s edition of the Pikes Peak International Hill Climb mere days away, participating teams have already eagerly started on-location preparations as the practice and qualifications are now underway. And, as far as electric car aficionados are concerned, the ones to watch will be the legendary Randy Pobst and his Unplugged Performance Tesla Model S Plaid.
8 photos

According to the official timeline shared by Unplugged Performance, the iconic driver got acquainted with the Plaid race car mere days ago. He probably didn’t have time to date this special Model S because he was quite busy playing with a yoke-equipped Plaid and passing all sorts of ICE racers from Porsche or McLaren (things like the P1 or Senna).

Now, far from us to stir the pot around the whole yoke steering wheel controversy, but the latest video released by Unplugged and humorously entitled “morning commute at 14,000 ft” (4,267 meters) shows no sign of the odd accessory. Instead, Pobst handles the course with style, substance, and ease while using a proper racing steering wheel.

As far as the actual testing is concerned, the Tesla aftermarket specialist seems quite happy with the results so far. Which, aside from the speedy performance (hitting up to 136 mph/219 kph “with no guard rails”), includes the fastest time of 2:40.86 for the section. It’s apparently good enough for the team to relax and deliver a few amusing social media posts (embedded below) to entertain the fans.

For example, the “secret co-pilot” has been revealed to be a CGI dog, while people have also been left with a little quiz asking, “who’s the fastest in our highly competitive exhibition run group during Day 1 practice?” According to Unplugged, the results might surprise us, but given all the hype around the Tesla Model S Plaid, it would have been astonishing if Randy Pobst and his Unplugged racer (hint, it wears the number 42 on the side) didn’t come out on top. 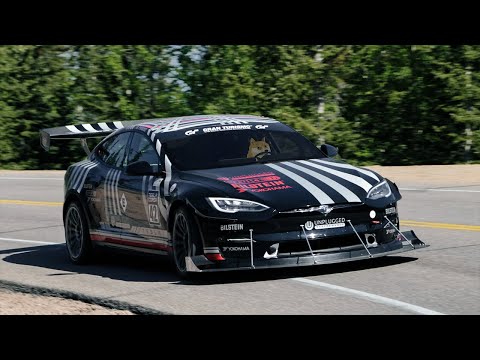 Who’s the fastest in our highly competitive exhibition run group during Day 1 practice? Of all of the purpose built race cars we’re racing against, the results might surprise you… pic.twitter.com/vqoIKMQoc5