3 Does Tesla Model S Plaid's ICE Really Have the Processing Power of a Sony PS5?

Like any Tesla new model release, the Model S Plaid wasn't without its fair share of controversy. First, it was the canceling of the Plaid+ version, the one everyone wanted to see - even those who ordered the Plaid. Then, it was the $10,000 price hike the night before the launch. And then it was the launching event itself.
29 photos

There was no surprise around the corner this time, no new model announced, no actual updates on the two models we've been promised years ago - the Roadster and the Cybertruck - there was none of the glitz we've seen in previous Tesla events. Just your usual suspects - Franz von Holzhausen and Elon Musk - taking the stage and talking about the new car's attributes in a way that would make it sound slightly better than it actually is without lying.

Apart from the performance - we'll get to that in a minute - one other talking point was the yoke replacing the classic steering wheel. The very few Plaid owners out there are starting to share their experience with the new steering device, and it feels like the learning curve isn't going to be that short. Besides, it's not just the steering wheel that's new, but also the indicators (no stalk, just buttons on the yoke) and the gear selector (now moved on the display, as well as capacitive "buttons" on the center console), and these are proving to be controversial as well. Then again, it wouldn't feel like Tesla if we didn't have a bit of that.

Finally, it was the EV's performance itself that drew a bit of criticism. Nobody is going to stand here and say the Model S Plaid isn't crazy fast, but there is an argument to be had against Elon Musk's claims for the sub-two second 0-60 mph acceleration. Engineering Explained's Jason Fenske explained in a very engineering way why that's highly unlikely, and then we've seen clips of the electric sedan's acceleration timed by a GPS performance measuring device, and it was far off the mark.

Sure, we'll have to wait until an independent party gets a Model S Plaid on a drag strip and does a bit of testing before knowing for sure what its limitations are, but in the meantime, we'll leave you with this very short but very telling clip.

It shows Randy Pobst, the man who took an Unplugged Model 3 Performance to the Pikes Peak last year with great success - despite eventually crashing spectacularly - driving an Unplugged Model S Plaid on the Laguna Seca track. More to the point, it shows Randy overtaking a Porsche 718 Cayman GT4 Clubsport on the circuit's straight as if the track-only sports car wasn't even trying (though the sound of its engine tells us it most definitely was).

The potential shown in this clip is quite frankly scary, and the text in the video's description, even more so. The guys at Unplugged Performance tell us the Plaid pulled similar moves on vehicles like the McLaren Senna and P1 (who were all there as part of the 2021 Hypercar Invitational charitable event), and this is still a work-in-progress prototype. Sure, having the circuit's most experienced driver behind the wheel helps too, but anyone can put their foot down on the straight, so that acceleration pull was all down to the car. It looks as though the 425 hp Porsche just suddenly decided to engage the reverse gear, that's the best way we could describe it. Just see for yourself. 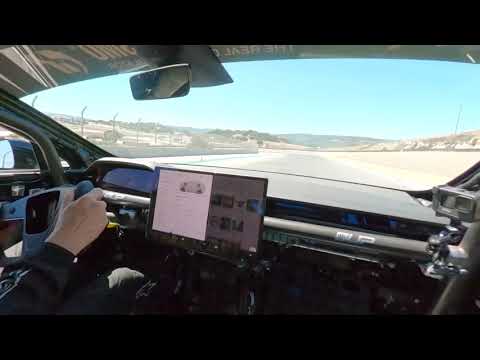