1 Chevy Trailblazer Pickup Thinks It's a New Montana, Might Miss the Tracker Point

The Japanese automaker has already pulled the plug on the Nissan Titan in Canada after the 2021 model year. Plus, sales and rumors paint a bleak picture for the United States, as well.
23 photos

Given the tremendous, decades-long dominance of the Ford F-Series – quickly followed by the other Detroiters just waiting for a slip-up to take over, it is no surprise that finding the right full-size pickup truck recipe is hard in North America. Look at the sales figures for the first six months of 2022, where the Nissan Titan ranks last.

So, it was no surprise that Nissan killed off the nameplate in Canada due to poor market sales, and it is certainly no shock that in the United States Titan’s days might be numbered. Well, according to the reports, the few fans this nameplate has will be allowed a little more time to snatch a collectible unit as the disappearance is scheduled in a few years when the current second-generation refresh has run its normal course.

In the meantime, folks are preparing solutions – even virtual ones. For example, the pixel master better known as Theottle on social media, has decided to tempt our imagination with an unofficial assumption that Nissan would swap truck nameplates and continue with a more premium idea based on the Patrol icon. Naturally, the CGI expert makes it seem easy to transition from the Titan or Titan XD to a Patrol V8 pickup truck.

So, the latest behind-the-scenes making-of video (embedded below) just takes the traditional front and rear three-quarters POV of the Nissan Patrol SUV and morphs it into a rugged yet stylish pickup truck with a little help from the current Titan Pro4X design DNA. The result may speak for itself in terms of nameplate legacy, but it remains to be seen if it will forever be just a CGI pipe dream or if there is any Patrol fire with the Titan discontinuation smoke… 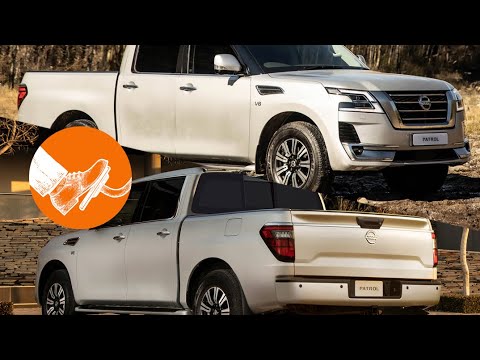