1 Mercedes Feeling More and More at Home in the US, Could Buy Naming Rights for NFL Stadium

4 NFL Player Lasts Only 8 Minutes in Hot Car, Proves Dogs Shouldn't Be Left in the Heat

5 NFL Star Arthur Jones Wants a Corvette Stingray, but He Can’t Fit in One
Up Next

Ionut Ungureanu
Here we were thinking only rappers and pop stars commonly customize their Mercedes-Benz Sprinters into out-of-this-planet limo vans when we stumble upon this particular breed. We’re talking about blacked out middle and rear windows, hardwood floor, high-quality leather and mainly all the top-notch gizmos you can get.
1 photo
After previously serving as head coach of the National Football League’s Miami Dolphins and three other universities, Nicholas Lou “Nick” Saban has been running things at the University of Alabama for about eight years now. We’re looking at a $32 million worth contract that made him one of the highest-paid football coaches, professional or collegiate, in the US at the time.

You’d say an annual salary of almost eight million dollars should be more than enough for a successful sports person like this gentleman, and you’d be right. In fact, he uses some amount of that cash to personalize his own cars, a Mercedes-Benz Sprinter in this case.

Called the Nick Saban Signature Series Mercedes-Benz Sprinter van, these puppies come in a limited-to-ten edition and have a $200,000 price tag. For that amount of cash, you could easily make one yourself, but it will lack the configuration the man himself designed.

With a general feeling of dark, business nuance, we’re looking at a seven-seating capacity, luxury van enhanced with everything from recliner seats with heating and cooling systems, cooler for the booze, not one but two three LED TVs and much more.

Add home theater units, high-end sound system, iPad-activated controls, and Mobile Direct TV satellite system and you're where you should be. Did we mention that two of the TV sets measure 40 inches diagonally while another is the high-end Samsung 4k UHD curved LED TV?

Yep, it’s the premium batmobile finished in the business edition, and it would make for the perfect party machine. Celebrating the team’s wins on the road, or just taking some time off with the family, this limo van will make traveling a lot better. 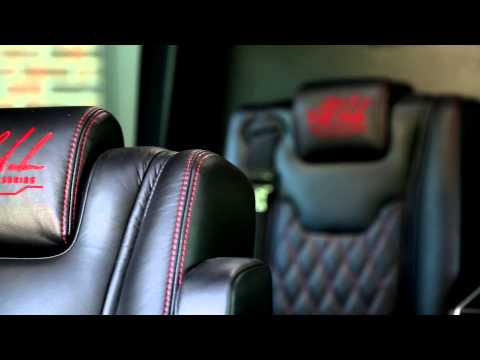