1 1978 Pontiac Trans Am Hides Too Many Unknowns, Still Deserves a Second Chance

2 Fluffy Iglesias Is Selling His 2015 Chevy Camaro Trans Am, It’s a Bandit

5 Abandoned 1979 Pontiac Trans Am Shows the Ugly Face of Humanity
Car video reviews:
Up Next

Unbelievable $440K Paid at Auction for Movie-Famed Trans Am

Realizing in today's money, $400,000 would amount to somewhere in the neighborhood of $1.9 million (1.856-million euros), the irony of the figure paid is difficult to overlook.

In actuality, the jet black, T-topped coupes with the distinctive golden firebird on the hood used in the film were 1976 models updated to look like 1977 models.

The buyer was clearly driven to outbid all others parties, given the condition of the car. It appears to have just rolled out of a photo shoot for a Pontiac marketing campaign with all original features; Uniroyal steel-belted radial tires mounted on gold anodized wheels, gold decals, Hurst T-tops, and gold dash detail. The car still has the original factory protective tape on the door sills and a partial genuine Pontiac window sticker.

In fact, the car was owned by Pontiac until it suffered some damage while on a promotional tour in North Carolina. The company then donated it to a local vocational high school for repairs, where it was then sold to a collector. The collector stored the car for years before selling it in 1997.

Charlie Herman, the most recent owner, told Fox News the car had been kept in perfect running condition.

The selling price was roughly triple what the collector car insurer Hagerty estimated the value of the car to be. The promotional car for the film was gifted to Burt Reynolds, who owned and drove it until 2014, and was sold in February 2022 at a Barrett-Jackson auction for $495,000 (483,454 euros)

The car sold at Mecum is possibly the lowest mileage 1977 Trans Am in existence and is also the highest price paid for a model without a direct connection to the movie. 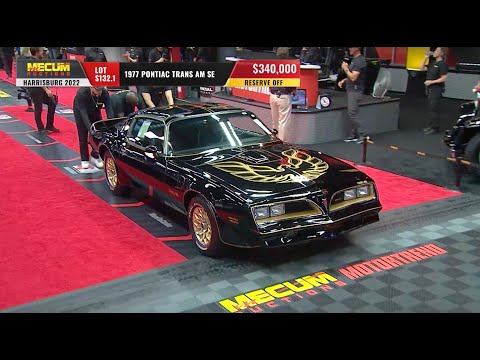