3 The Curious Case of the Seventh-Gen Nissan Sentra NISMO

Should You Fit Two New Tires to the Front Axle or the Rear Axle and Why?

Home > News > Car Profile
12 Nov 2021, 23:53 UTC ·
by Stephen Rivers
Nissan built just 44 of these ultra-rare cars and only 40 are known to still exist. This one just became legal here in the USA in September. In fact, it's the only one here in the country right now.
6 photos

The NISMO 400R was a project that Nissan took on with the intention of making 100 examples in 1997. It's reported that just 44 were ever built, but only 40 have officially been confirmed.

Today, depending on who you ask, they're each worth well over a million dollars. This particular car actually sat in Canada for a long while, waiting until it was finally legal here earlier this year.

What makes it so special isn't just that it's rare. It was built by Nissan's racing division, not by the main company itself. Each car has rare 400R-only parts and pieces as the video below highlights. That includes the very unique and iconic hood made from carbon fiber.

It also includes stamped exhaust tips, a pair of R32 seats with 400R stitched into them, and a carbon fiber spoiler. Each of these items can't be obtained aftermarket. The strut bar itself is one such piece and can cost up to $10,000 on its own, according to the owner of this 400R.

Of course, the motor under the hood isn't the same as the one in the regular R33 GT-R either. It's a 2.8-liter motor that makes, you guessed it, 400 horsepower. It also features a 9,000 RPM redline. Those figures and the excellent chassis will get the 400R to 60 mph in just 4 seconds flat.

This particular car gets compared to the Ferrari F40 in this video because of its price tag. Hilariously, it's likely even more special than that. Not only is it similarly priced, but considering that more than 1,300 F40's were built, it's much rarer. 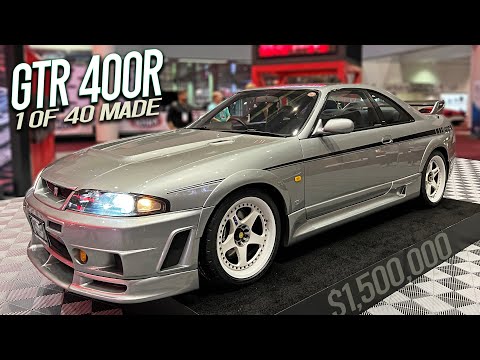