1 How to Stoppie on a Motorcycle

2 How to Wheelie on a Motorcycle
Up Next 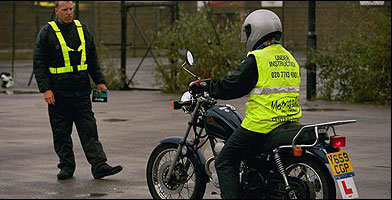 One month ago, the UK Government brought a new motorcycle test, which now is put under the question mark by most riders and instructors. In just four weeks there were 15 incidents during the exam, with at least one rider leaving with broken bones, BBC News reported.

When changing the test, The Driving Standards Agency (DSA) said it was needed in order to help reduce deaths of motorcyclists on the roads. The new test went through 300 trials before it was introduced. Now, with everybody against it, it might be the time to rethink it.

The Motorcycle Action Group (MAG) also thinks the test is very unsafe. MAG Chairman, Paul Turner said "We don't mind improvements in the test which will make for better riders, but putting people at risk during the test is ludicrous."

During the test, the riders have to reach 50 km/h and then perform a swerve, on special test centre tracks. The instructors say the new swerve test is to blame for all the unfortunate incidents, since it is dangerous, mostly in the wet.

Moreover, if riders brake the same time they swerve, they are very likely to hit the ground. Riders are also against the new test, as they have difficulties to safely achieve the 50 km/h of speed required by the maneuver.

Jeff Stone, of the British Motorcyclists Federation, said: "There is no real argument with the actual test, but the DSA really do have to take note of 'real world' conditions.A brake and swerve maneuver on a wet road is fraught with danger for even an experienced motorcyclist, so there needs to be a safer option for inclement weather conditions."