4 This Is what Happens when Rappers Get Freedom of Design

5 Hamann Brought Out a Color Explosion Atop a BMW M4 in Geneva
Car video reviews:
Up Next

Andy Saunders is renowned among British car tuners, even though his work is not exactly part of the aftermarket industry. He has been modifying and creating new body styles from older models since he was a kid, back when he couldn’t even drive them. Many contraptions stand out, but two football/soccer-related projects he has done for Hyundai made him quite famous.
1 photo
Five years ago, the world was getting ready for a worldwide sports event that would see hundreds of millions of people follow the ball, literally. The 2010 FIFA World Cup in South Africa may as well be considered a major turning point for the British car magician who says his cars are works of art.

As the main car sponsor of the event, Hyundai took two i10s and commissioned Saunders with a particular project. The vehicles were covered with artificial turf and had lines that “any groundsman would be proud [of].” Two cars that would spread but one message: let the games begin.

Many other projects have followed, with the UK craftsman slowly turning into a car-tuning icon. Even the happy-three-friends at Top Gear asked him to build a special car for the show, a road-going version of the Nissan DeltaWing racer. Throughout his “career,” Andy Saunders has created an impressive list of customizations, including a flat car that stands at just 21 inches high, and a Hyundai, which splits apart and opens out in two.

By far one of the most dauntless models, The Picasso may be representative of the type of work the innovative designer does. Built on top a classic Citroen, the tiny French vehicle is now an artistic masterpiece that defies the uniform laws of mechanics and aerodynamics. Even so, it still is fully roadworthy and capable of hitting 65 mph. The video below sums up Saunders’ best creations and tells more about what his work implies. 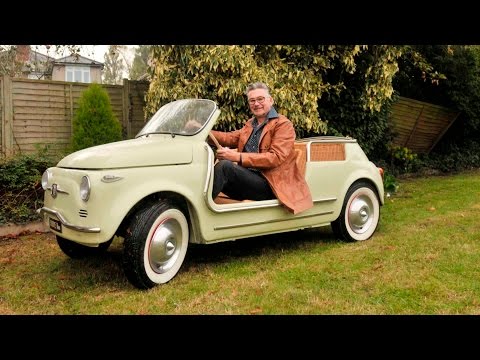