1 PSA: Riders Republic Is Free to Play for a Limited Time on PC and Consoles

Suggestively called “Summer Break,” the third season of Riders Republic is now available on Xbox One, Xbox Series X/S, PlayStation 4, PlayStation 5, Google Stadia, as well as PC through the Ubisoft Store and the Epic Games Store.

The third season brings a bunch of new free content that players will be able to access, as well as weekly programming spotlights, including a special Reforestation event, the release of two of Showdown mode’s toys into the in-game shop, and an event to celebrate the much-anticipated arrival of BMX.

The first special event of the season is Project Rebirth, which has just started and runs through August 10. According to Ubisoft, the event was conceived as a proposal last year at the 2021 Green Game Jam, a game development competition run by the United Nations Environmental Programme’s Playing for the Planet Alliance that challenges participants to create events or game modes focused on raising environmental awareness.

During Project Rebirth, players are invited to participate in the Reforestation event, allowing them to plant trees in a desert area to help reforest the region, using a teleportation point that will lead them to a base camp.

A new Mass Race course called Desert Bloom will begin for all players in the desert, which, thanks to the community's reforestation efforts, will gradually become covered with plants and trees. Then, on July 30, the event will culminate in the Climate March, where players can participate and show their commitment to climate action. Not to mention that the Summer Break comes with a new season progression system, with new summer-themed customization. Also, the sponsor Trek will be joining the ranks with new rewards for players to unlock.

Last but not least, at the end of Summer Break, Riders Republic will host an event that will mark the beginning of the BMX sport add-on, with weekly challenges focused on BMX-style freestyle activities. 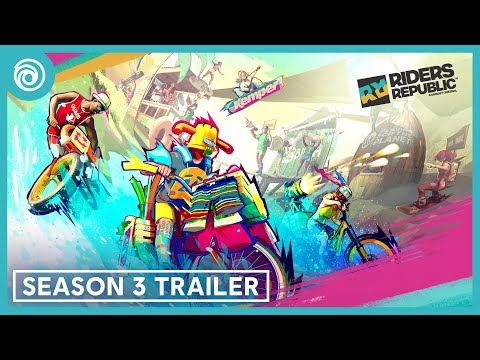