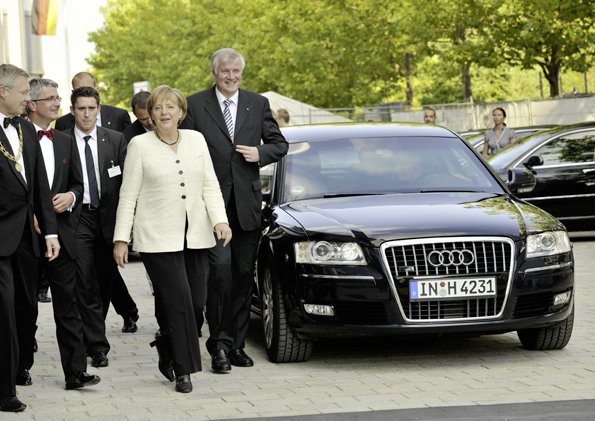 Audi made its centennial celebration a memorable event for those who attended its Anniversary Gala held in Ingolstadt on Wednesday evening. More than 1,800 guests witnessed a double world premiere at the event: the unveiling of the new Audi A5 Sportback and the first performance on the new Audi design grand piano, given by Lang Lang, a well-known Chinese pianist.

Other highlights of the gala were the speeches held by Rupert Stadler, Chairman of the Board of Management of AUDI AG and German Chancellor Angela Merkel, and the first performance of a symphony composed specially for the ceremony by music producer Leslie Mandoki.

Angela Merkel and Rupert Stadler were the ones who wrapped off the latest Audi model, the 2010 A5 Sportback, which comes to join the Coupe and the Cabriolet models. “No matter how greatly the car of the future may differ from today’s car, there will continue to be a desire for individual mobility all over the world,” said Chancellor Merkel in her personal podcast on the Internet.

Stadler also commented on the future plans of the German carmaker, saying that it will extend its technological lead, as Audi is already focusing on identifying the key drive technology of the future. “In our opinion, hybrid technology will bridge the gap and then electric drive will become increasingly important,” explained Audi’s CEO.

{img2 align=left]Needless to say, Audi’s list of events that celebrate its centennial does not end here. Today, one of Germany’s most popular hip-hop bands will perform on stage in Ingolstadt at the “Audi Rocks 100” party. Furthermore, for July 18, Audi planned demonstration runs on the historic Donauring, while a special exhibition called “From Horch to Audi” is scheduled to open on July 15, at the August Horch Museum Zwickau.