1 Porsche Taycan Drag Races Fiat Panda 4x4 in the Snow, Is Not First Off the Line

2 The Perks of Driving an Electric Car in Winter

3 Get a Grip: Driving on Snowy Roads

4 How Well Can the 2020 Land Rover Defender Deal With the Colorado Winter?

5 The Most Useful Winter Accessories for Your Car
Car video reviews:
Coverstory

Winter and road transportation were definitely not made for one another, but people want their goods, so just because it's cold and freezing and sometimes even downright dangerous to drive, that doesn't mean the truckers get a day off.
1 photo
Well, if they did, we wouldn't have this short video to wonder at - not to mention other important stuff such as bread or diapers. The person posting the clip says it was a day when "traveling was not recommended," and if we needed an illustration for why that was, we couldn't have asked for a better one.

Let us set the scene: a host of semis are stopped at the foot of a seemingly benign hill, incapable of moving forward. The incline that in normal conditions would have slowed them down a little without posing any major trouble even with a fully loaded trailer (or tanker, as is the case here), might as well be as steep as the final ascent on mount Everest now because there's no way they're getting up there.

By the looks of it, the road surface is not even that bad. There's no black ice or anything, just a little bit of slush, and yet the semis didn't dare venture forward without a little bit of help. That help came from a pair of 4WD trucks - a Chevrolet Silverado and, leading the convoy, a Nissan Titan.

The driver of the car from which the video was filmed was coming downhill but saw the weird scene and had to go around another parked semi, so she decided to reverse to make room for the maneuver. She could have stopped much sooner but was probably too absorbed by what she was seeing and wanted to stick around some more, especially since she had the camera out as well.

Despite having plenty of grip, the two pickup trucks struggle with the sheer weight of the tanker as they wiggle across the road like a dog in a harness who just smelled a piece of bacon around the corner. The "passenger seat driver" mentions the risk of the trucks sliding into their car, but even though it may not have looked like it, the Titan and Silverado were actually always in control.

The only questions we have now is whether they went back down to pull the rest of the semis and if they did, was it a long day? Also, what happened when the tanker came across the next uphill section of the road? It must have been comforting knowing the two trucks were behind and would catch up at some point. 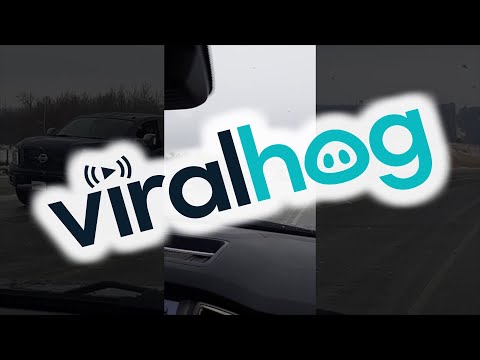