3 China Closes Airspace to Russian-Owned Aircraft, but Only to Stolen Planes

Two of the World’s Biggest Superyachts, Nord and Motor Yacht A, Sail Under Russian Flag

In a new twist in the seemingly never-ending saga of international sanctions, Russian oligarchs are fighting back in a very interesting way. Two of the world’s biggest and most expensive superyachts, which have managed to avoid capture so far, are now sailing under the Russian flag.
39 photos

Since the start of the war in Ukraine in February this year, several countries, including EU members, the UK, and the U.S., have imposed economic sanctions against Russia. These include the seizure or temporary arrest of Russian-owned assets like superyachts, real estate, auto fleets, and private jets. The decision to impose sanctions has struck panic among superyacht owners (and not only) and sparked a cat-and-mouse game where the same owners try to avoid seizure by stowing their assets on friendly ground, where possible.

Billions of dollars worth of boats are already in the hands of authorities, with some of the world’s most famous and expensive superyachts detained in ports all around the world. But two have managed to escape: the 2021 Lurrsen build Nord, which is owned by steel billionaire Alexei Mordashov, and Motor Yacht A, the 2018 Blohm & Voss build owned by EuroChem founder Andrey Melnichenko. The former is worth a reported $500 million, while the latter has a price tag of $300 million, and both are iconic in the industry due to their unique and memorable silhouettes.

Both boats are in friendly waters now: Nord was able to sail from Seychelles to Vladivostok in April this year, after traveling “in the dark” after AIS (automatic identification systems) tracking was turned off, while Motor Yacht A went off the radar in March, and was just recently discovered in the port of Ras al-Khaimah in the United Arab Emirates, where it had been hiding since mid-April.

According to vlogger and superyacht expert eSysman SuperYachts (see the video below), both vessels have been de-registered by the Lloyd’s Register and the DMV, two international maritime classification societies that ensure ships are up to modern, seaworthy standards. Prior to this, the vessels were sailing under the Cayman Islands flag, which is standard practice: the flag of convenience has nothing to do with the nationality of the owner, and is chosen for tax reasons only. De-registering a vessel means forced mothballing it because it can no longer sail international waters or secure insurance.

Nord and Motor Yacht A will probably be an exception, albeit with limited mobility. Both vessels are now sailing under the Russian flag in what would be a first in this sector of the industry. This could mean a variety of things industry outlets can only speculate on, ranging from Russia “seizing” the superyachts to the oligarchs taking a stand to show allegiance to Putin. It most definitely means that both Nord and Motor Yacht A are now sailing with all-Russian crews and no longer trying to hide. 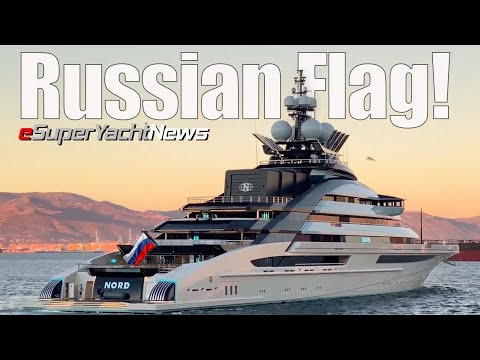