Elena Gorgan
Like with many other Russian oligarchs, it’s difficult to estimate just how many luxury assets Roman Abramovich has. But one thing is certain: two more of his superyachts are moving to friendly waters and, in the process, out of reach for international authorities.
14 photos

Roman Abramovich is on sanctions lists in the UK, the U.S., and the European Union, which means that assets tied to him can be seized if found in any of these territories. Until ownership is established, the same assets can be arrested – which is what happened to superyacht Halo and support vessel Garcon in late March.

Halo and Garcon, two spectacular though comparatively smaller builds, moored at Falmouth Harbour in Antigua and Barbuda just as sanctions went into effect after the start of the war in Ukraine. Flagged under the Bermuda flag, they were arrested after British publication The Observer determined that they were owned by British Virgin Islands-based company Wenham Overseas Ltd, which, in turn, was supposedly owned by Abramovich.

At the UK government’s request, Antigua detained the two vessels but did not seize them. A later investigation determined that the direct beneficiary (i.e., the actual owner) was, indeed, Abramovich, but Antigua didn’t have sanction laws or the grounds to impound them. Both ships left Antigua on Friday, July 22, and are now crossing the Atlantic together, heading for two different ports in Morocco, eSysman SuperYachts reports (see the video below).

Both Halo and Garcon are now sailing under the Cook Islands flag, with re-registration taking place just before they left. Antigua officials are keeping mum on the reason for the departure or, for that matter, on whether they knew the ships were about to set sail. A likely reason would be that, since they had no grounds to impound the vessels, they no longer had the right to detain them.

Garcon is an even more impressive build, as it’s both a support vessel and an explorer, delivered by Damen Yachting. With a total length of 220 feet (67.2 meters), it offers an impressive volume of 1,145 GT divided between garage functions and actual living space (including luxurious quarters) for 21 people in total. Powered by 4 Caterpillar engines, it can reach 25 knots (28.7 mph/46.3 kph) at full throttle and cruises at 18 (20.7 mph/33.3 kph). 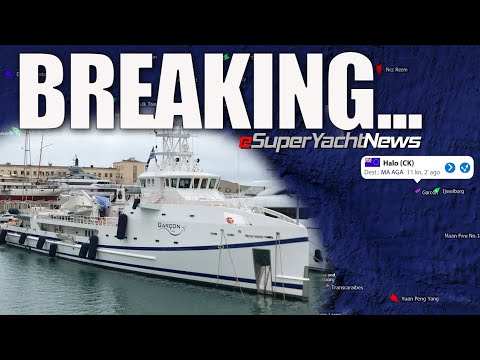