3 TRX, Bronco, Can-Am Maverick Go for Mountain-Pass Off-Roading Because They Can

5 Bronco Vs Wrangler Vs Defender Go for Off-Road Test, One Doesn't Return
Car video reviews:
Up Next

Two-Door Ford Bronco and Defender 90 Go for Mud Wrestling, One Breaks the Ice

Right at the edge between dreadful autumn and a frozen winter sits the perfect off-road forest setting. And in the limelight, a couple of SUV heroes trying to prove their legacy and battle for supremacy.
44 photos

Ford’s Bronco and Land Rover’s Defender are both hugely successful nameplates. But it’s no wonder the reviewer behind the Canadian Truck King channel on YouTube starts with a rant: “comparing a Ford to a Land Rover? That doesn’t make any sense!” He does think otherwise, as “these two vehicles have a lot in common.”

Stuff like their nameplate history or being modern interpretations of classic SUV prowess. As well as a short wheelbase and just two doors, on this particular occasion. Sure, everyone is entitled to their own opinion, so he also breaks down the differences. Among them, Defender’s turbo and supercharged powertrain with 395 horsepower and mild electrified assistance against Bronco’s slightly underpowered 330-hp V6 engine.

Or the fact that one is a unibody SUV now, while the other has kept the vintage-flavored truck-based recipe intact. And the former is more adept for a night out in Beverly Hills, while the latter is the more adventurous type when in Wildtrak form and equipped with the glorious Sasquatch package.

Now, since there’s an entire forest playfield behind the trio, we refrained from selecting a winner until the SUVs ducked it out among roots, grass, rocks, as well as lots of mud... and a body of icy water or two. Without spoiling the result, we have to say the battle was a little more balanced than expected.

So, do watch the rock and mud-crawling action kicking off at the 3:55 mark with the Defender clearly winning the interior assessment part. But that wasn’t the purpose of the comparison video (embedded below), so do watch the part where one of the rivals struggles more than a bit (kicks off at the 7:14 mark). Then, from the 12:45 mark, the ice breaks – quite literally – and we can finally see both truly coming to grips with the wild elements of nature! 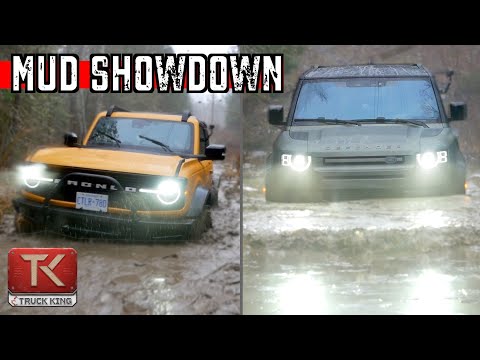