Alex Oagana
This year's German Formula 1 Grand Prix at Hockenheim should be highly expected by Mercedes-Benz fans everywhere, as recent reports speculate that the upcoming Mercedes-Benz AMG GT (C190) will be revealed that very weekend.
1 photo
Sporting a newly-developed four-liter V8, the three-pointed star sports car will follow in the tire tracks left by the SLS AMG, which is going out of production this year.

Despite being based on a modified and shortened platform of the SLS AMG, the AMG GT will be situated slightly lower in the range as far as pricing goes, targeting the Porsche 911 and the Jaguar F-Type.

Codenamed M178, its twin-turbocharged V8 was developed by bonding two M133 four-cylinder engines from the A 45, CLA 45 and the GLA 45 AMG together.

The resulting four-liter V8 reportedly has its twin-scroll turbochargers situated inside the two cylinder banks, just like BMW M5's S63 engine, or Audi RS6's 4.0 TFSI, while the total output will vary in the AMG GT from around 500 hp to over 600 hp, depeding on the version.

We already had an idea of how the new model sounds or how its interior looks like, but this longer video also shows the car(s) in the daylight and on the move, so we're pretty far from being disappointed. 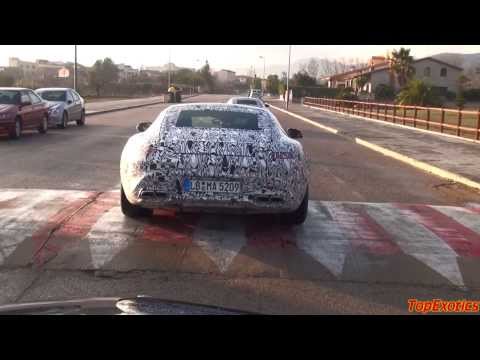