A single 2023 Chevrolet Corvette Z06 at Laguna Seca is good enough in terms of aural pleasure, but a duo makes it all the more pleasurable. Filmed by Speedster404 roaring during flybys, the mid-engined cars in the featured clip both appear to be equipped with the Z07 performance pack.
6 photos

The four-wheeled banshees further appear to rock the carbon-fiber wheels, which are pretty expensive on their own. For starters, Z07 customers have to spend $8,995 on top of the $105,000 suggested retail price. Bear in mind we haven’t accounted for the freight, gas-guzzler tax, and dealer markups.

After that, you’ll be asked by the dealer to pick between Carbon Flash-painted or Visible Carbon Fiber Aero, which adds $8,495 or $10,495 to the tally. It’s getting pretty expensive, right? Considering that demand for the supercar-killing Stingray hasn’t eased up since the C8 was introduced for the 2020 model year, it’s only natural for General Motors to capitalize on this rising demand with the far more desirable and far more capable Z06.

Recently described as mind-blowing by Christian von Koenigsegg, the Z06 features a free-breathing mill derived from the C8.R endurance racecar. The second Corvette in history with a DOHC valvetrain after the C4 ZR-1 also boasts the largest and most powerful flat-plane V8 ever fitted to a production car. Capable of 8,600 revolutions per minute, what Chevrolet refers to as LT6 is a clean-sheet design with a minor small-block characteristic.

A small block at heart due to its 4.4-inch bore spacing, the LT6 is actually good for 9,000 revolutions per minute if you remove the limiter. Titanium intake valves and sodium-filled exhaust valves complement forged aluminum pistons, forged titanium connecting rods, a couple of throttle bodies, an active split intake manifold, and four-two-one exhaust headers.

Lubricated with Mobil 1 engine oil as long as it’s 5W-50 and certified with the Dexos R logo on the bottle, the LT6 is connected to a slightly different transmission from the dual-clutch unit of the Stingray. Codenamed M1M, this box is both stronger and features a numerically higher final drive. Corvette program engineering manager Josh Holder notes a 5.56:1 final-drive ratio instead of 5.2:1 for the Stingray Z51 and 4.9:1 for the Stingray. 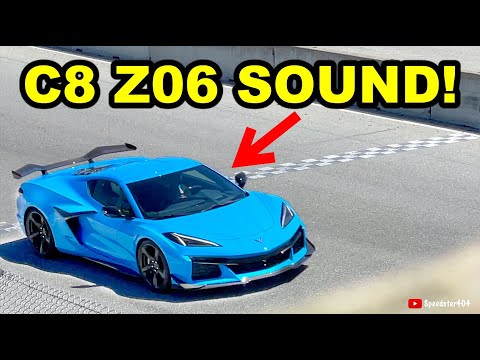