2 It's Time to Buy Yourself a Competent Fire Truck, and This Toyota Dyna JDM Is Just Perfect

3 100 Modernized T-72 Tanks Reportedly Vanish, as “Thieves” Just Drive Off With Them

4 Times Are Tough, Buy Yourself a 585-HP Diesel Fire Truck

5 Autonomous Firefighting Vehicle Concept Is Designed to Serve the World’s Bravest
Car video reviews:
Up Next

In 1991, Desert Storm took the invading Iraqi army by storm and pushed it out of Kuwait. The retreating troops of Saddam Hussein set ablaze some 700 oil wells. Following the war's end, firefighting teams from around the world rushed in to put out the inferno. One particular Hungarian fire-taming trio got wind of the hot action in the Persian Gulf and decided to blow over the burning oil geysers.

As it so happened, they were no ordinary firemen and carried a secret weapon to the firefight. Named Big Wind, it took the shape of a double-jet-engine-strapped WWII Soviet tank - something no other fire brigade deployed in 1991 Kuwait had ever seen. A shocking crossbreed between two pure-war machines, the vehicle looked like the type of machine the Devil takes for a joy ride.

Take an awe-inspiring T-34 tank, scrap its turret, and replace it with a pair of MiG21 interceptor jet engines. To up the cool factor, put a control cabin behind said turbojets and top everything off with six nozzles, three above each of the jet exhausts. A Mad Max view indeed, with its red paint and brutal 42-ton take-no-nonsense demeanor.

Be that as it may, the mighty vehicle proved efficient against the 300-foot-high scorching furnaces. Once fired up (PUN definitely not intended!), the mega-beast of a fire engine would spray 220 gallons (830 liters) of water every second at the base of the raging fire.

The two jets would provide the blowing power, while high-pressure water would gush through the nozzles atop the thrusters. Instantly turning into steam, it would quickly prevent the oxygen in the air from feeding the flame, asphyxiating and killing it.

Sounds nice and clean, but to kill the fire, Big Wind would need to get up close and personal with the 2,000-degree Fahrenheit (1,100 Celsius) roaring oil thrusting out of the Earth's crust at 4,400 PSI (303 bar). Just 25 feet away (eight meters) from the hellish eruption, the temperatures inside the vehicle would skyrocket. The controls could only be operated with special heat-deflecting gloves. The three crewmen would each be protected by special full firefighting raiment.

To manage the fire tank, the crew had to man the battle stations: the driver sat inside the tank, at the very front of the monster. The jet engine operator's place was inside the cabin at the back of the machine, leaving the fire chief to casually walk alongside the behemoth tracks. To communicate with its colleagues, the chief used a particular console that triggered lights and high-pitched sounds on panels inside the tank and the cabin.

Every single command had to be acknowledged by the other team members with a push of a button to confirm the orders. An extra safety feature – a dead man switch – would also need to be engaged every 15 seconds by both driver and jet engine operator. Amid 130-dB deafening shriek, traditional comms were useless.

All in all, Big Wind put out nine fires during its 1991 Kuwait mission (you can see it in action in a brief sequence of the Fires of Kuwait documentary). Having been sent into retirement soon after its heroic assignment, the vehicle got upgraded, and the chassis of a Czechoslovakian VT-55 tank replaced the aging original T-34 platform. Even more powerful, the red tank saw action one more time in 2013 to put out a fire during a gas well blowout drill.

Top speed is limited to a steady walking pace of 3 mph (5 kph) for safety reasons concerning the jet engine blowers. Speaking of which, the twin turbojets are R-25 Tumansky with 30,000 lbs (13,607 kgf) of maximum thrust combined. However, the practical output was limited to 70% to prevent the engines from overheating before putting out the fire. 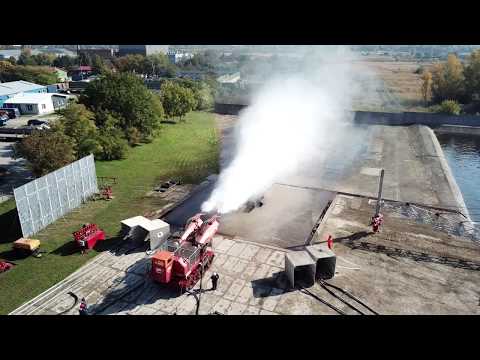 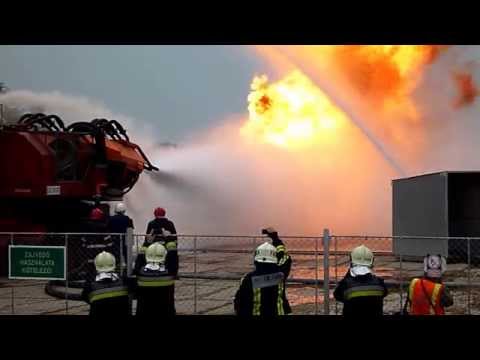