Home > News > U-turn
Cristian Gnaticov
No matter which version of the Lamborghini Huracan one refers to, they are all extremely fast. Thus, you can only imagine what a twin-turbo conversion can do to the Italian supercar, can’t you?
7 photos

You should be able to do that, as we wrote about several such builds over the years. Only this time, the base model started life as a Lamborghini Huracan Performante, so it already had a big advantage over the lesser variants.

Now, it’s clear that the stock Huracan Performante is a force to be reckoned with, and that’s without any modifications whatsoever. Nonetheless, the one depicted in the video down below has stepped into the hypercar territory, with much more power than the original Bugatti Veyron. According to the uploader, the engine pumps out 1,232 hp (1,250 ps / 919 kW) and 811 lb-ft (1,100 Nm), courtesy of the twin-turbo conversion. And the best thing about it is that the team responsible for making it even more fun hasn’t messed around with the looks.

But how fast is it in the real world? You can find the answer to that question in the said footage, which shows this bad boy unleashed on a no-speed-limit section of the German Autobahn. You only need to take a short break before hitting the play button, as it is almost 4 minutes long. In addition, don’t forget to work that keyboard afterward in the comments section, and let us know your thoughts about this beast. 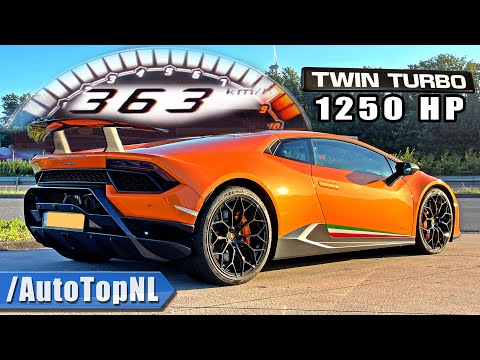