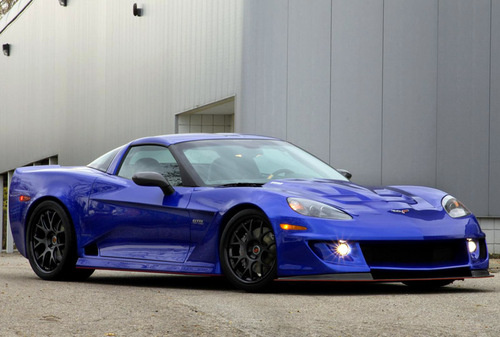 Specter Werks and Lingefelter, two of the most well known tuners in America, have put together a really badass version of the Corvette C6. The recipe was quite simple, but very successful: they took the radically restyled Specter Werks Corvette GTR, stuck an 800 HP Lingenfelter twin-turbo 7.0-liter LS7 under the hood and forced carbon fiber HRE wheels underneath.

“Specter GTRs have been featured at SEMA for many years and we're excited to debut the most unique example to date at this year's show,” said Jeff Nowicki, president of Specter Werkes/Sports. “From the BASF pearl paint and HRE carbon wheels, to the Lingenfelter engine, there's never been a GTR like this one and we think it will resonate with sports car enthusiasts of all stripes.”

The use of HRE carbon fiber wheels on a GTR is quite new. Keep in mind that each one weights just under 10 kg and use Michelin Pilot Sport PS2 Zero Pressure tires. Additional features of the GTR include StopTech STR big-brake package, featuring six-piston front calipers and four-piston rear calipers, Mobil 1 synthetic fluids, a Corsa exhaust system with GTR-specific exhaust tips, Spinneybeck hand-tipped leather interior accents, Matte-finish carbon fiber accents, including the headlamp housing, front splitter, outside mirrors and more.

The Specter Werks Corvette GTR manages to pull out nicer figures than the 535 hp and 720 Nm Corvette ZR1, but the real war should take place on a track. Until then, you can check out this blue and black monster at the SEMA Motorshow.