4 Stock Shelby GT350 and Camaro SS E85 Are Almost Evenly Matched, but Not Quite

Twin-Turbo Charger Thinks It's Got an Easy Win vs Tuned Mustang GT, Gets Stunned

Sergiu Tudose
When it comes to certain cars, horsepower figures can be deceiving, especially if you already carry around too much weight and you don’t have the ideal engine/gearbox combo for handling additional grunt. This 392 HEMI-powered Charger is the perfect example.
6 photos

That engine is mated to an eight-speed 8HP70 automatic transmission, which falls short of the Mustang’s ten-speed auto, but more on that later.

According to the uploader, this Charger boasts a twin-turbo setup, boosting (literally) that 392 HEMI V8 all the way to 600 whp, or roughly 710-720 hp at the crank. Now, does that twin-turbo mod make the 6.4-liter V8 as capable as the supercharged 6.2-liter V8 in the Hellcat variant? We’re inclined to say no. Furthermore, this is a very heavy car, especially compared to a more conventional/sporty muscle car.

Then we need to factor in the gearbox, namely Ford’s 10R80 ten-speed unit (also available in the F-150, Expedition, Lincoln Navigator, Ranger, and Bronco). It’s definitely more advanced than the eight-speed box available in that Charger, let's just leave it at that.

Add together all these variables, and the result of that first race will make all the sense in the world. The Mustang allegedly spun its wheels a little too much on the second try, but it’s not like it got seriously gapped or anything. 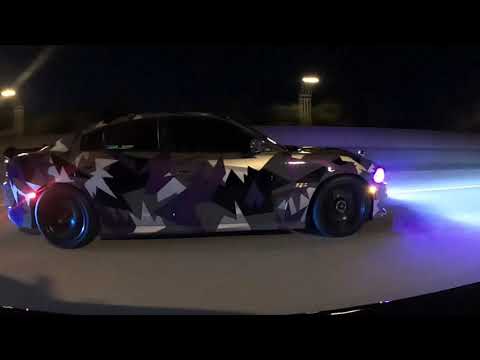