1 Limited $1,998 TeraLaunch Wheel Set Is the Proper Way to Spruce Up a C8 Corvette

Aurel Niculescu
With perseverance, optimism, patience, and probably loads of money, renowned YouTube vlogger Emelia Hartford has managed to achieve stuff that most aftermarket companies only dream of. Such as taking home the world records for the most powerful (at least until FuelTech broke it) and fastest C8 Chevrolet Corvette. But that doesn’t mean she has stopped in her pursuit of perfection.
17 photos

Even though General Motors made the eighth-generation 'Vette notoriously hard to upgrade because of a tightly locked ECU, that doesn’t mean there are no C8 Corvette horsepower wars going on. On the contrary, because we all know the forbidden fruit is always much sweeter.

As such, we’ve been following with great interest the exploits of Emelia Hartford, a well-known vlogger that has been very passionate in her quest to make a white and orange C8 entirely worthy of the Guinness World Records. It’s been a long and arduous journey, sprinkled with lots of failures and distress moments.

But also with victories, and the duo has been on fire (this time around only figuratively speaking) these past few months both on the dyno and at the drag racing strip. Her latest video sees the twin-turbo C8 (nicknamed Phoenix for its propensity to overcome all odds) at the Famoso Bakersfield Raceway, a drag strip located in McFarland, California, just north of Bakersfield.

Hartford and the crew seem to have rented out the racetrack to play all by themselves, so it’s safe to say that anyone passionate about quarter-mile action will have more than plenty of that during the video embedded below. The action starts at the 4:30 mark, but many of the initial runs are just for warmup and nowhere near the ultimate goal of getting the C8 to run in the 8s.

So, after loads of tweaks, some failed runs, neat POVs, it’s time for the real deal. The appetizer comes from the 7:45 mark when Emelia and Pheonix hit a 9.5s pass, but that’s still not enough to beat her previous record ET of 9.41s. 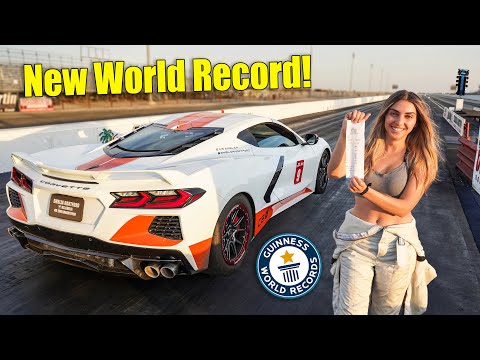