Although it’s been designed primarily to handle, the eighth-generation Corvette Stingray is one serious piece of kit on the blacktop. The 5.2:1 final drive ratio that Chevrolet offers as part of the Z51 pack translates to blistering acceleration off the line, and even the base C8 clocks 11.2 seconds over the quarter-mile at a slightly lower speed than the Z51.
8 photos

There is, however, a problem with the mid-engined ‘Vette. The control unit for the small-block V8, to be more precise, which is encrypted on a wholly different level from the seventh-generation model. Aftermarket companies called out GM over this limitation, but GM still refuses to budge. On that note, there’s always the sledgehammer approach to modifying the Corvette.

Last October, the peeps at Extreme Turbo Systems ran 9.95 seconds on the quarter-mile with 1,021 rear-wheel horsepower. The secrets to such crazy numbers come in the guise of a twin-turbo kit consisting of PT6466 from Precision Turbo, a water-to-air intercooler, an upgraded fuel system, a less restrictive intake manifold, beefier clutches, and a new engine control unit.

With the electronic brain from MoTeC, go-faster parameters for the software, and a set of super-sticky drag radials out back, the Extreme Turbo Systems C8 Corvette has recently posted an elapsed time of 9.05 seconds. The trap speed is tremendous in its own right at 159.53 miles per hour (256.73 kilometers per hour), which is better than the Tesla Model S Plaid tri-motor sedan.

To whom it may concern, the ETS C8 Tuning Package that includes the aforementioned MoTeC ECU is listed at $13,758. Only Available with a twin-turbo kit that adds $13,995 to the tally at the very list, this mod is probably the best option C8 owners have right now for dipping into the 9s.

Going forward, the Detroit-based automaker will improve the ‘Vette with a flat-plane crankshaft V8 in the upcoming Z06. The high-revving powerplant is certain to receive some aftermarket love as well although the ZR1 will feature a couple of spinny boys in conjunction with the engine of the Z06. 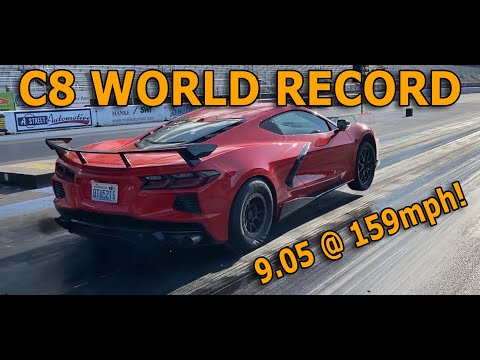